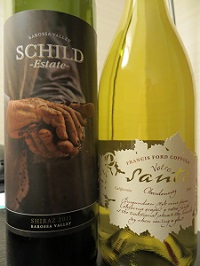 (March 10, 2015) ... My wife's conference in Philadelphia ran long tonight, I finished all I had to do and received a text that she would be another hour or so ... And so I cracked the first of three bottles I would open tonight.

The Schild Estate 2011 Shiraz, Barossa Valley out of Australia was one of the few bottles I bought multiple bottles of, I had tried this wine back at home and enjoyed it very much - though as it turned out it was a different vintage. The nose isn't your typical Aussie Shiraz with delicate herbal notes hanging in the background, then in comes the plum, black cherry, and slight hint of floral. Palate is plum and white pepper with mocha on the finish and definite floral on the mid-palate. I'll admit it's not exactly what I was expecting, and a little odd on the finish but still tasty.

Next up was a white wine, the Francis Ford Coppola 2013 Votre Sante Chardonnay, a sweetish Chardonnay with lots of sweet vanilla, butterscotch, delicious apple, praline almond, and peach - its drawback was the definite sweetness from mid to finish ... it's not my cup of tea but I know this style has its fans. For me this was a sweet, sugary over extracted overly oaky (seemingly fake oak - or could it be over-lees-ed) ... whichever it is it is a train wreck of a wine, no balancing acidity for all that oak-sweetness. There was a recommendation of food on the back label but I could not see this matching up with anything but someone who wanted sweetness in their Chardonnay - and not the fruity kind, more like the sugary kind. 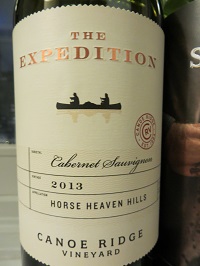 After that mess I had to open something new, so out came a Canoe Ridge Vineyard 2013 The Expedition Cabernet Sauvignon, Horse Heaven Hills. I have been a Horse Heaven Hills fan for quite some time, so I was hoping this one would not let me down; and thankfully the horse delivered. Aromas of plum, blackberry, blueberry, red currant, raspberry; followed up with blackberry, blueberry, mocha, plum, subtle tobacco, and vanilla. I would have to say it was the best wine of the night, it was complex without being taxing. 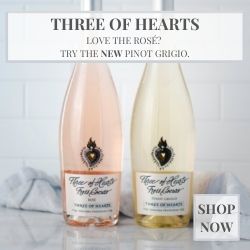