(March 13, 2015) ... These Chardonnay nights are getting to be a little too frequent for my liking ... But if I am going to do it I want the wines to interest me. Which is why I found these two older bottles in my cellar and decided to pop their corks this evening. 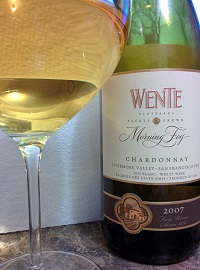 I kicked it off with a Wente 2007 Morning Fog Chardonnay, at the time of its release, and still to this day, I think it one of the best Morning Fog Chardonnay's I have tried ... But that was then and this, is now. I was not surprised by its rich golden colour, nor by the nose of almond skin, praline, a little smoky, caramel apple - and over the course of about half an hour it developed a slight creamed corn note.  The palate is very much a let down, although there was really good acidity still, there was also peach pit, buttered toffee, touch a almond/praline and before you smelled it you could taste those hints of creamed corn. It's definitely a wine that has seen better days ... The good news is the current release (2013) reminds me of the 2007 - so buy it now and drink much sooner. 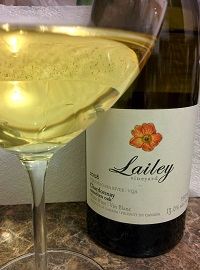 My next bottle was a Lailey 2008 Canadian Oak Chardonnay ... Unlike its American counterpart the Canadian wine (aged in Canadian derived oak might I add) had a pleasant pineapple, coconut, and apple aroma followed on the palate by peach schnapps, apple core, coconut husk, peach pit, a decent amount of minerality, and a pinch of vanilla. The acidity has held up well and continues to be the backbone of this wine along with its long finish. I think the surprise here was that after some 6+ years the wine still maintains a certain element of freshness.