A continuation of a previous article - see part 1 here. 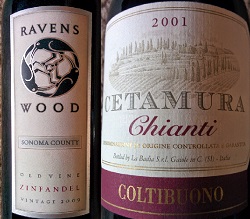 (April 18, 2015) ... The next two bottles were not from Ontario - I found a bottle of Coltibuono 2001 Cetamura Chianti - this came from my wife's cellar when she moved here, she was given it as a gift and she just held onto it (an when it came under my care I did too) ... she could not remember who gave it to her and she is not a red wine fan, so we popped the cork ... alas this bottle was done, over, finished, and probably was years ago. I could not let my guests leave on such a low note, and so I opened something that they were not expecting: Ravenswood 2009 Zinfandel, Sonoma County - Zin is a guilty pleasure of mine, I just love them, and feel I can never have enough bottles of them (you never know when a BBQ is going to break out and you'll need a bottle) ... this Ravenswood was the cat's meow.  Nose of plum and black cherry and a palate that just kept giving different taste experiences with each sip:  plum, black cherry, mocha, spiced-vanilla, sounds like it could be one of those thick, syrupy-sweet Zins, but instead it had great acidity to balance everything out. And with everyone ooo-ing and aah-ing over this one there was only one thing left to do ... Drop the mic, I'm done.