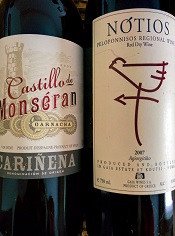 (May 14, 2015) ... Here we are, final night of the All Canadians' and more wine from 'away' is poured. Starting with a Castillo de Monseran 2007 Garnacha, Carinena (Spain) - this wine was rated as best value in Canada by the now defunct Wine Access magazine. So at under $12 how did it age? Surprisingly well. The nose gave away very little, in fact it was almost non-existent, but the palate was exceptionally smooth with delicate cherry nuances - I won't want to hold it any longer but it was very palatable. On the other hand the Gaia Estate 2007 Notios, Agiorgitiko was sealed under plastic and it tasted old and funky, delicacy does not survive under plastic, brute force has a better chance.

Other wines brought by other people ...

Some wines were extras from the morning tasting, while others appeared magically, a bottle of Moraine 2013 Pinot Noir proved to be a real head scratcher, as I could have sworn I was drinking New Zealand, my friend and fellow scribe, John, who is quite knowledgeable about BC wine, said the winemaker, Jacklyn Kemp, was from New Zealand - the depth of flavour here was amazing: black cherry, touch earthy, with dark cranberry, it was full fruited yet with great delicacy. The finish rode the fruit wave with cranberry and black cherry - a stunningly good wine that showed a pretty nature.

Another wine that found its way to the table was the Gray Monk 2011 Meritage, Odyssey. The black cherry, and vanilla smoke aromas lead to a nice balance of black cherry, vanilla, smoky, cedar, and acidity on the palate. What a tasty treat.