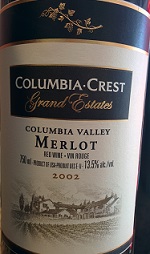 (September 5, 2015) ... So I've just come from a Washington state wine dinner and decided to look deep into the cellar to see what kind of old Washington wines I could find and these three bottles from Columbia Crest stood out to me - all from the 2002 vintage: time to check out what 13 year old Washington is tasting like. 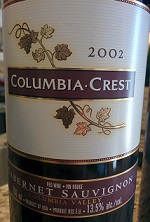 Columbia Crest 2002 Merlot, Grand Estates Merlot ... The best of the lot:  nose of cherry and vanilla while the palate is smooth and silky with black licorice and dried black cherry. 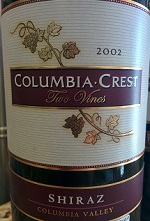 Columbia Crest 2002 Shiraz - Two Vines ... While definitely a wine you COULD still drink with the other two in the room why would you - there's some interesting smoky notes along with vanilla, dried blackberry, a little pepper.

All in all I'd say a rather successful vertical of Washington wines.

Of course there was also a back up bottle present, and if got opened too: Felino 2007 Malbec ... A smoky, blueberry, cassis, and peppery number with touches of mocha and oak on the finish.