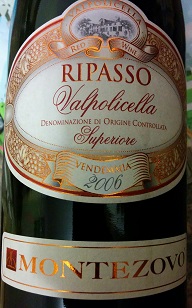 (March 25, 2016) ... Here's another Ripasso I pulled out of the cellar this month, a little older than the Farina 2010 and 2011 I tried earlier in the month (linked here); but this one is just as impressive, maybe more considering its age and shows that this style of wine has the potential to age as gracefully as big brother Amarone.

Kicking things off were smoky, mocha, plum, black cherry and licorice that appeared as the bottle was opened, I would describe it as "fresh with an aged edge" plus there's a noticeable cedary-ness to the finish. This was a wine I was going to spend the evening with to see where it wanted to go and after about 2 hours it developed considerably: coffee bean, cedar, and licorice root, but still with some sweet fruit at its core, the alcohol was fairly high, though not apparent on either the nose or palate (14.5%). For a ten year old Ripasso this was quite enjoyable.