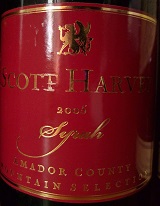 (October 1, 2016) ... We took our wine drinking on the road tonight as we visited some new friends for dinner. This is where I learned that the Jack Daniel's bag marinade (available only in the US) is awesome: you put the steaks in the bag in the morning, wait till dinner and voila - the flavour is amazing (grilled of course) ... These are some tasty steaks, and tasty steaks need tasty wine - so here are our hopeful candidates.

Scott Harvey 2005 Syrah, Mountain Selection ... My Michigan buddy Dave introduced me to Scott Harvey years ago and this was the wine I bought from the man that day: now it's smoky, licorice, and peppery - right where it should be, or maybe even better than expected after 10+ years. It's a touch on the older fruit side from where it was 8 months ago (the last time I opened a bottle) but still nice. 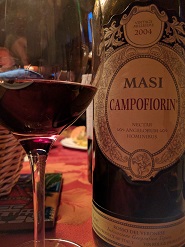 Next up an even older Masi 2004 Campofiorin, and man it's a good wine right from the get go: mocha, plummy blackberry, anise, dried black cherry, good acidity and a touch of spice. As it sits in glass it opens beautifully, black cherry reigns supreme while it settles across the tongue smooth and silky. "HELLO, Glad to meet'cha" it's wines like this that makes Masi such a great producer year after year. 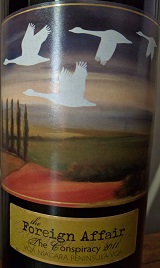 Finished this dinner tasting off with an Ontario Ripasso wine, the Foreign Affair 2011 Conspiracy - not as exciting as the Mass, but it's hard to compete with the original: spiced plum and sweet cherry, though there is a little VA along with some white pepper rolling around in here.