Two from The Lucky Country (Australia)

I noticed in my wine cellar that I had some wine from The Lucky Country, a brand from Two Hands, so this week I decided to open both of them and see how they were doing. 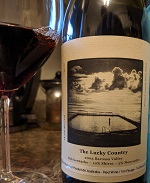 This is a blend of 85% Grenache / 10% Shiraz / 5% Mourvedre ... kicking things off were the aromas of licorice, dried raspberry, along with subtle plum, backed by coffee bean; on the palate there was an intense silkiness - super smooth, almost creamy - with flavours of spiced-and-dried plum, along with notes of forest floor and white pepper - as the wine began to really open you could find hint of mocha beginning to emerge ... I'm happy with this one as it proved to be well-rounded and easy drinking for an older wine. 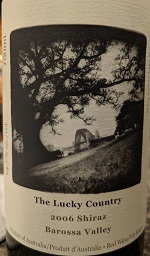 This solo Shiraz, three years younger than its predecessor showed very different, yet still appealing, character starting with spiced-plum, new leather, raspberry/strawberry jam on the nose; the palate had lots of pepper and spice, along with mocha and burnt cherry. As it sat and opened up through the course of the evening it took a different turn; while it was fruit forward from the outset it develops into a spice / acid bomb by the time the first hour was up - enjoyable for about an hour and a half, after that it's pretty harsh.