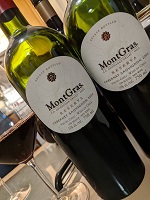 (January 29, 2020) ... During a podcast recording for Two Guys Talking Wine, I brought in a double helping of Montgras Reserve Cabernet Sauvignon - I found them side by side in the cellar, thinking they were the same wine. I wanted to drink just one, but when I looked at them I noticed they were different vintages and had just been "mis-allocated" in the cellar hierarchy ... seemed like a perfect opportunity to try them both:

Starting with the 2005 Reserva Cabernet Sauvignon ... red licorice, subtle mint, juicy red fruit, cherry Jolly Ranchers candy and good acidity - but it's the juiciness that stood out, for a 15 year old wine to have that much mouthwatering and tasty fruit seemed to almost defy both description and probability.

With high hopes we opened the 2006 Reserva Cabernet Sauvignon next ... earthy, black fruit, older smell, feel and taste then the 2005; hints of cedar and smoke dominated, with dried fruit from start to finish and the dried mint leaves left a more herbaceous note behind on the finish.

We then had an idea inspired by my friend Dave in Michigan, who is famous for his "Dave-o-tage" at the end of a multi-wine night (combines all viable wines left into one blend).  We combined both wines and it worked wonders: the 2006 added a backbone to the fruitiness of the 2005.

I have no more of these wines, but if you have either kicking around in your cellar (and according to CellarTracker there is some still around) ... the 2005 is the winner, if you have both, decant them into the same vessel together and you'll have one great magnum.