(September 18, 2020) ... There are times I look back at these notes I have taken and wonder what possessed me to taste / drink these particular wine ... since nothing comes to mind when looking at these three (some months later) I am going to have to guess I was just kicking around in the cellar and my hands landed on the necks of these three (on-purpose or accidentally???) ... the only thing I know for certain: arancini balls were involved and I was sitting outside to taste. 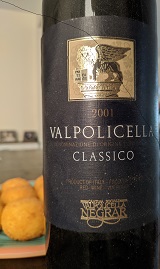 Negrar 2001 Valpolicella Classico ... This one was cranky, almost angry, at first: sour, anise and foresty-floor on the nose; but the palate really is impressive with sour cherry, smoky, "foresty", and earthy notes. After 30 minutes this wine was dead ... gone and buried ... the drinking window was the 10-20 minute mark when it was truly palatable. Truth is I was surprised it was good for even that long.

Remo Farino 2001 Valpolicella Ripasso ... Break out the crying towel - this one never stood a chance --- it was corked. Which probably "forced" me to open the third bottle. 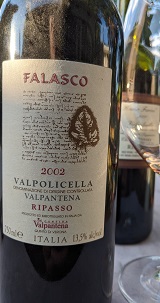 Valpantena 2002 Falasco Valpolicella Ripasso ... Since the first Ripasso was corked it was time to check out another - and this one was quite impressive. Only one year younger than the other two wines this Ripasso had some really interesting notes that managed to lure one into the glass and drag one along for the ride over the next hour or so: anise, smoky, spiced plum, licorice, coffee bean, cedar forest with damp leaves also playing around - there was a long finish that held mainly cedar notes, but this wine was WAY better than expected especially after tasting the two previous wines.