It’s no secret I am a small-f “fan” of the Left Field Sauvignon Blanc. I discovered this wine back in the summer of 2017 during a tasting of wines from around the world – it was so good in fact that 1) it made my video series (here) and 2) I put the winery (Te Awa) on my list of must visits when I visited New Zealand in early 2018. As an aside, during that same tasting, which was done at home, I brought a glass up to my wife who immediately proclaimed it her “wine of the summer” – we purchased at least a case of the wine and with the new 2017 available we’ll be doing much the same.

While in New Zealand I spoke with winemaker Richard Painter about the Left Field brand and Te Awa in general: 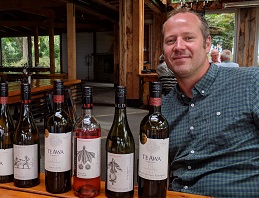 “The origin of the Left Field name actually comes from the Te Awa vineyard which has two distinctive soil types: the ‘Te Awa Single Estate’ range has the “Gimblett Gravels” appellation name on the label. We then created the Left Field brand as an avenue to produce wines from the parts of the estate that are not on Gimblett Gravels soil. Before the grapes were planted, that side of the property was always known as the “Left Field”, hence the name was really a physical reference for the wines produced from those grapes on that side of the vineyard. In 2014, we wanted to expand on the name Left Field and embrace the quirky and unexpected connotations that the name implies, hence the whimsical design of the labels.”

For the label they gave designer Aaron Pollock carte blanche to “go crazy”: “Basically we felt a lot of wine labels are traditional and a bit boring so we wanted to have some fun with them.”
“Aaron calls them “Whimsical Creations”. They [are based on an] old Biology text book, the pictures have been re-illustrated by hand and various creatures have been mashed together to create new ones.” Aaron also incorporated the old windwill that is situated at the winery’s front gate into each illustration, and each creation has its own whimsical back story written on the label.

As the brand expanded they started to branch out with their sourcing of grapes:

“Our Sauvignon Blanc is from Nelson, at the top of the South Island. We wanted a typical New Zealand style Sauvignon Blanc, but we wanted it from somewhere other than Marlborough.”

“The Left Field Pinot Noir comes from Marlborough, while the Rosé, Pinot Gris, Chardonnay, Merlot, and Syrah are all Hawkes Bay fruit. Rosé and Pinot Gris, are sourced from cooler parts of the Bay; the Chardonnay and Reds tend to come off the Te Awa vineyard itself.

As for anything new and upcoming Richard is really excited about the Albariño from Gisborne: “we have been making it for a few years now. The wine has the beautiful purity and intensity of fruit you expect from New Zealand wine, but it is very textural with a subtle richness. It’s the perfect wine to pair with seafood.”

Availability for these wines can be a bit of a problem here in Ontario. “Being single vineyard wines and produced in small quantities, the Te Awa Single Estate wines are mostly sold in New Zealand; the Left Field brand is a little more widely available. Our own LCBO carries two on the General List: Rosé and Sauvignon Blanc – but then I learned about something called the Products of the World Program – which might just change the way wine-lovers buy wine in this province.

So I did little more digging and found Tod Stewart who has an awfully long title (Operations Analyst, Products of the World, Private Ordering, LCBO) – who was a wealth of knowledge about the Program.

Introduction to the LCBO: Products of the World Program …

In speaking with Tod Stewart I learned about the exciting possibilities with Products of the World – it’s like nothing else the LCBO has introduced to date, and it’s so much more than just the 17 destination stores they have been touting in the occasional press release. The LCBO has been rather quiet about this initiative and in its marketing campaigns, so let’s see if I can’t shed a little light on the program with the help of my good friend Tod:

What is the Products of the World Program (POTW)?
“An exciting LCBO initiative designed to enhance customer choice and flexibility, while allowing agents to offer unique and/or niche products in quantities smaller than typically sought by Vintages and/or General Purchase.”

“Items are sold through the POTW program either via e-Commerce (www.lcbo.com) or at one of the program’s current 17 “destination” stores (for locations see the list below). As there are no product “calls,” all agents are free to submit products for consideration. As such, new products are continually appearing online and in the destination stores.”

“Consumers can conveniently access an ever-changing range of products that would not be readily available, by-the-bottle, via any other program or service. POTW gives LCBO customers the opportunity to purchase rare, unique and limited availability wines and spirits from around the world.”

I asked Tod if there was a list of all the products involved in the program; the short answer to that question is “no” – but there is a way for you to look on-line and get an idea of what products are available – you just need a little patience:  “you can go to the search engine of lcbo.com and enter any information on the product you might be interested in (assuming you know it). Another way – if, for example, you want to see all the POTW items from, say, Italy – type “Italy” into the search engine. Then, to the left of the screen you will see “Availability.” The “Online Exclusive” usually denotes POTW items.”

How many products are currently part of the program?  So far there are more than 2,400 unique wines, spirits, beers, and liqueurs available for purchase via a combination of POTW destination stores and online, and most will never show up in Vintages or any other Category, so those are the only ways to get them.

The big question is how much can I order? In the past to get unique products like this you needed an agent and had to purchase a case; but through POTW it’s a different story:  Single bottle purchases can be made at the destination stores, and most POTW items are also available for purchase by-the-bottle online, with more selections to come in the future. Minimum order is $50 with free shipping to a store near you or a nominal fee for home delivery.

Products of the World locations: