(February 26, 2020) ... Ilaria Cocco, the namesake for this winery, is a self-made, self-taught winemaker that has ties to the land going back to 1650 and a winery that began its activity in 2008. The winery produces 10,000 bottles annually off of 3.5 hectares of vineyard in mostly stony-sandy soils:  2.2 hectares of Sagrantino, one hectare of Sangiovese and three hectares of Merlot inhabit the land ... The vines were replanted between 2001 and 2003, but once operation began it took Ilaria 10 years to “become familiar with the cellar practices … I have experimented about the style to give my wines … and also to give the vines opportunity to grow and mature.”

First vintage of Sagrantino was in 2013 the Rosso and other wines came out a year later. Production breaks down annually like this:

The wine names all come from the history and landmarks on the property. “Camorata” is the vineyard’s name; “Phonsano” is named after a spring that runs through the vineyard; “Frotiola” after a dried-up spring called ‘Font Viola’ (purple spring). Iliria shows a real passion for her wines and for what she has taken over as her life's endeavor. She is one of, if not the newest winery, within the Montefalco consortium and she is leading the next generation of wineries in this region - and if that is in fact the case, Montefalco and Sagrantino are in very good hands. I wish her well and hope to see her and her wines in the Canadian market and taste them and future vintages again as she gets more years and experience under her belt.

The wines we tasted were mostly from the 2015 and 16 vintages, though we did try all her vintages of Sagrantino. I'm also a big fan of the unique squat-style bottles she has decided to use to make her wines stand out in the marketplace and on store shelves.

2015 Rosso - Camorata
A 60% Sangiovese, 25% Merlot and 15% Sagrantino aged in both barrrique (225 L barrel) and botti (large barrels) for 6 months ( 50% stainless / 50% oak ), the tannins are quite aggressive while the acidity is high: smokey and leathery notes with slightly sour fruit that makes it a little bitter on the finish.

2016 Rosso - Camorata
Same blend as the 2015 but now aged all in those large botti for 6 months ... A much softer wine, especially on the tannin-laced front end, but then the fruit really starts shows through; still with some smokey, cigar box and leather but with a nose of dark fruit that should begin to appear on the palate in the coming years. Same 50% stainless steel and 50% oak aging.

2013 Montefalco Sagrantino - Phonsano
Age 18 months in oak (all large botti), 9 and 1/2 months in stainless steel and then 12 months in bottle, seems to be the standard recipe for this 100% Sagrantino wine. There's a soft sort of elegance to this vintage with its sour and black cherry, plus smoky and toasty notes. Tannins are non-aggressive with good acid balance. A nice inaugural vintage that should be drunk young (within the next 5 years).

2014 Phonsano - Montefalco Sagrantino
This is the first year that the name on the label comes first, and going forward she has decided to stick with that formula on the label. See above for the recipe and barrel regime ... This lean year (read: difficult) shows lean fruit characteristics; non-aggressive tannins, gentle red fruit, good acidity and even some floral elements ... Dominated by sour cherry along with herbal smoky and toasty notes. 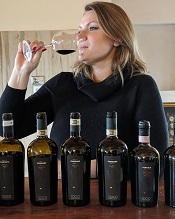 2015 Phonsano - Montefalco Sagrantino
This version of the 100% Sagrantino is definitely tight and closed, where dark fruit wins out on the mid-palate with white smoke, toast and cigar box / tobacco, plus balsamic and red currants, it even shows a hint of mocha – the tannins are aggressively tight on the finish and I'm not sure where the fruit / tannin tipping point is, or which will take over, with the winery’s history being so minimal there is no track record to fall back on – but I'd like to believe five years will tell the tale and that eventually the fruit will prevail. Definitely needs another tasting in about three years.

2016 Phonsano - Montefalco Sagrantino
Too early to really tell on this one as well so far the fruit is muted and the aromas and flavors come across as funky and odd – but look, it's early days for this wine and 2016 was an exceptional vintage – it also shows why these wines need so much time in both oak, tank and bottle before release. Good things will happen here as the wine takes time to mesh together.

2015 Fontiola - Passito / 500ml bottle
This sweetie is made from 100% Sagrantino grapes harvested twice: the first harvested grapes come in 10 to 15 days before maturation and the second harvested fruit at full maturation ... Nice sweet fruit notes of cherry mixed with chocolate all-balanced with acidity for freshness – soft round and tasty. A truly delightful dessert wine.

2016 Fontiola - Passito / 500ml bottle
When compared with the softness of the 2015 this 2016 is a little more angular with sweet black cherry, balsamic and dark chocolate, but there's hints of a  tannic punch on the finish - that seems at odds with the sweet mid-palate notes. Give it time to soften.