(October 9, 2020) ... What are Double Diamond wines? In simple terms, they are the second wines of Schrader Cellars in Napa Valley, which leads us to our next question, who is Schrader Cellars?

Started by Fred Schrader, who, after tasting a mind-blowing, earth-shattering, life-changing To Kalon Vineyard Cabernet, decided to meet with Andy Beckstoffer and talk him into selling him some of his fruit ... Problem is that Fred doesn't actually make wine, so he also does some fast talking to get winemaker Thomas Brown (formerly of Turley Wines) to join his project. By 2004 Wine Spectator took notice of their project – and Parker raised his eyebrows of approval in 2006. Today, a majority of Schrader wines are wait-listed. 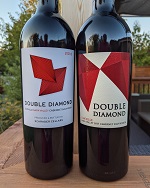 Enter Double Diamond ... These are the second wines of Schrader and is touted as a “daily drink” for those who want to lay their Schrader wines down. The philosophy, according to winemaker Thomas River Brown, is: “To deliver far in quality beyond their price point."

It's a wine you can comfortably bring into your house and easily serve right away and “while people say you should bury this stuff for 10 to 20 years, the truth is people are drinking this stuff right off the FedEx truck," Thomas Brown says with a chuckle.

Double Diamond is mainly a Cabernet Sauvignon wine, but it is also a way to bring in experimental vineyards and varieties, test them out, and not have to dump them or sell them on the bulk market. Blends can be tested, varietals experimented with and will then become Schrader or Double Diamond wines, if they meet the standard - interesting to note that To Kalon fruit is a big part of both Schrader and Double Diamond, in fact the vineyard’s fruit makes up 80% of the 2018 Double Diamond wine ... that’s because Thomas B has a hard time pulling focus away from this historical vineyard: “when someone says ‘here's 450 acres of To Kalon fruit, pick what you want’ I'm pretty much going to stick around."

Before tasting, In his words Thomas wraps up the vintages we are about to try in a few words: 2017 was the first fire year and had heat spikes in September so it was very challenging; while 2018 was a much better vintage and claims that he was able to create a "super joyous wine".

Double Diamond 2017 Cabernet Sauvignon
Cabernet Sauvignon appears on the label but there are bits and pieces of Cabernet Franc 7%, Petit Verdot 1% and less than 1% of Malbec and Merlot; aged 14 months in French oak (49% new) ... all from the Oakville AVA. Big fruit leads with cassis and black cherry, plus notes of chocolate, cinnamon, nutmeg, and anise along with hints of oak and cedar. Once open for an hour it becomes silky smooth and even more fruit forward shucking the baby fat and making it a super drinkable wine. (****+)

This is 100% Cabernet Sauvignon from the Oakville AVA of Napa, and mostly from the famous To Kalon vineyard ... Aged for 16 months in 50% new French oak. This is a wine that broods in the glass from the first pour and continues as it sits in the glass. Big tannins and spice with cedar, vanilla and smoke – the palate digs in with earthy, blackberry and cassis, but as it opens there are more Syrah-like notes of bacon fat / smoked meat / and pastrami ... The dark fruit does swing in and out, but it's those tannins that constantly bite back. (****)