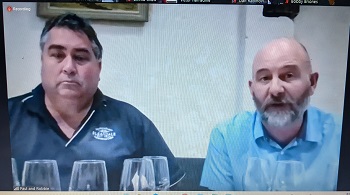 (February 2021) ... During these Co-Vid times it's nice to be invited to anything and Azureau Wine & Spirits (agent in Ontario, Canada) put together a dandy tasting with senior winemaker Paul Hotker, of Bleasdale Wines in Australia, on the zoom call to  talk about the wines and what makes them so unique when compared to the usual Aussie fare we see here in Ontario (and in many other places of the world); joining Paul is Robbie Potts - you'll figure out who he is as we go ...

First off, Bleasdale makes wine in the Langhorne Creek area of Australia, a place that is 10°C cooler than McLaren Vale - Langhorne is a pretty small place, making up only 6000 hectares of the total growing area of Australia; their average rainfall is 350 mm per year and they get 1520 heat degree days with an average temperature of 19.9°C.

Bleasdale was established as a winery in 1850, but the history really starts in 1836 when founder Frank Potts comes to Australia at the age of 21 ... By 1850 he had accumulated enough money to buy himself 120 acres to start a winery and for the first 100 plus years the winery made a name for themselves by making fortified wines. In 1961, the winery tried its hand at making a dry table wine, and as luck would have it, the first to come out was a Malbec; as Paul explained during the tasting, " Bleasdale is proud of its Malbec" and later during a tasting of the Broad-Side (reviewed below) he says "Malbec is the remedy to all red wine maladies" ... Paul came out with some other great bon mots that I will attribute to him a little later in this piece.

Today, Bleasdale Winery is 170 years old and they have jettisoned much of their fortified beginnings, now making 85% red table wines - they are also the second oldest family owned winery in Australia (Yalumba Winery is one year older than they are). And while fortified is not their mainstay as it once was, In another way they have not strayed far from their beginning, size-wise they are now 130 acres of vineyard (up only 10 acres from starting point) - and Paul likes to refer to themselves as "gardeners at heart". The vineyard makeup is mostly red varieties: Cabernet Sauvignon, Shiraz, Malbec, Grenache, Petit Verdot, Carmenere, Merlot and Mataro with Verdelho being the only white variety, which they turn into fortified wine (still staying close to their roots).

One of the things I noticed during the tasting was the beautiful acidity, which seems to be a hallmark of these wines - wonderful for food and a departure from what one is used to from Australian wine:  "When you've got beautiful fruit just pick it", Paul said – that is his philosophy and that's how he makes his wines. 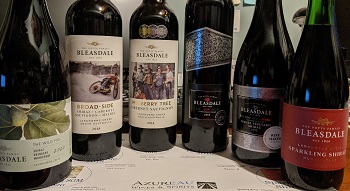 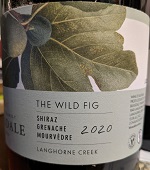 This Shiraz (67%), Grenache (23%), Mourvedre (10%) - might seem like an Aussie staple blend, but this one sees only 6 months in aged French oak puncheons and stainless steel, which helps to maintain the freshness: white pepper, cassis, raspberry, along with spicy notes and good acidity all materialize from the get-go ... As it sits open the red fruit comes out adding in some nice red licorice notes.  (*** ½+) 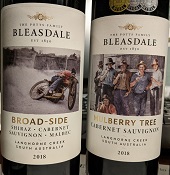 - with only 10% new. Leads with spicy notes followed by dark fruit: blueberry, raspberry, black cherry and a lovely seam of acidity. As it sits open everything kind of smooths out and that finish becomes all cocoa, black cherry and pepper with a raspberry linger.  (****)

2018 Mulberry Tree, Cabernet Sauvignon
With the addition of 5% Petit Verdot, 3% Merlot and 2% Cabernet Franc this wine begs the question: is Australia only able to make over-the-top reds? And the answer is: not if you taste this Mulberry Tree Cabernet. Gentle cassis, blackberry & even some tea leaf notes – it opens nicely doling out good acidity for balance, plus loads of fruit and a little bit of eucalyptus (pretty typical for Australian Cab) ... This one could easily be mistaken for a well-balanced northern or high-altitude Chilean or Argentinian Pinot then an Aussie Cab – but that's something I like.  (****) 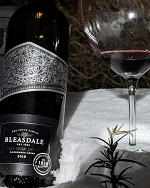 This Cabernet is only made in “great” Cab years and in limited quantities (five barrels for the 2016) - it is a best barrel selection, from the best vineyards (of which there is a choice of six). It then spends 12 months in French puncheon and hogsheads with 25% being new. The nose starts off with a lovely savoury element with herbal and dark fruit notes; the palate is lovely with its dark fruit and spice, and spice, and spice (it's quite spicy) - there's also an oaky note, but it does not overwhelm and should dissipate with age. It's interesting (read: almost weird) when you expect jammy and instead get savoury, acidity and spice; but also very welcome.  (****) 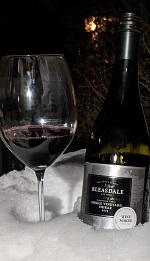 This is a five-barrel Shiraz that's vineyard is located just behind the cellar, planted to three clones and pruned using various methods. The first vintage of this special wine was 2008 and was NOT made in 2011, 2017 or 2020. Originally the fruit was going into the Broad-Side, but Paul used to lunch in the vineyard with his family and noticed something special about it ... So, he started his tests and voila the wine was made. Beautiful dark fruit from beginning to end: black cherry, blackberry, cassis with black pepper and that good acid seam Bleasdale is known for, plus a lovely spice note on the finish. Speaking of the finish it is medium in length and both jammy and savoury.  (****+)

Easily the best sparkling Shiraz I have had in a long, long time - many would think the style dead (or at least a dying breed), but Bleasdale continues to make its exceptionally well and in it their own style. In 1997 they had a big Shiraz year and needed to do something with the excess grapes ... Since that day they have kept the base but freshened it by adding the new vintage of Shiraz into it (a modified solera system) ... They then bottle a batch, usually "pre-Christmas" - they double their volume every year and even do half bottles. It is also interesting to note that Langhorne is too warm for Pinot Noir and Chardonnay. When you have an opportunity to pick up this bottle, I would recommend it highly.  (****)

The Screwcap Nautical Theme...
Each Bleasdale screw cap top has a nautical wheel on the top: at 9 years of age Frank Potts was part of the Royal Navy and at 13 he took his first voyage where he ran gunpowder from below deck to the guns - he did this till he was 17 years of age - the job was called a “powder monkey”, and to pay homage to that time the vessel steering wheel adorns the top of each bottle. 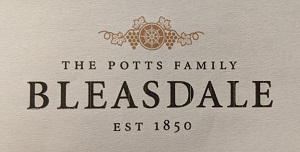