(October 2021) ... Trust the Italians to come roaring out of the gate to create a wine “event” virtually during a pandemic that is the “first wine event in history to connect the city of Milan with 11 metropolises worldwide in seven key export markets - the USA, Canada, the UK, Russia, China, Hong Kong and Japan.”

For the Toronto market six “Masterclasses” we're arranged, three on the Monday (October 4th) and three on the Tuesday (October 5th) simulcast from Milan to a room at the Dymon Wine Cellar bracket which is a beautiful place unto itself - and Canada's largest wine storage facility.

The three classes set for the Monday we're on Chianti, Prosecco and ended with a native grape seminar ... Sadly the first event: A Chianti DOCG 2019 seven sub-zone comparative tasting was plagued by a pouring error - the wines poured on one side of the world (in Milan) we're not the same wines in the same order poured on the other (in Toronto) - so the comparative was lost on us; and while the informational portion was up to snuff it was not backed up by the tasting portion. 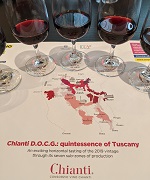 Our speaker for the event was Luca Alves (Chianti Wine Ambassador) who said “Chianti is never boring” ... I can certainly attest to that.

Due to the wine mix up I can't be sure what I tried matches my notes so I'll leave the wine tasting part blank here.

The newest Prosecco category is “Prosecco Rosé” which is a new level of production brought into existence due to an amendment of the rules in 2020 allowing up to 15% Pinot Noir into the blend, plus Prosecco DOC rosé also needs to be vintage dated (another change in the rules).

Valdo 2020 Prosecco Rosé DOC “Oro Puro”
There's a little raspberry and orange peel-like note, plus there's complexity not expected in Prosecco and there's even a texture across the palate that's quite welcoming. This is going to be an interesting style going forward.  (*** ½+)

Native grapes are always fascinating to me ... Tasting wines made from grapes that (for the most part) grow nowhere else on the planet. There are 76 DOCGs based on native grape varieties and 322 DOCs - there are 608 registered varieties of which 550 are native. 8 wines were tried under this umbrella.

Antonin Facchin e Figli DOCG Treviso Prosecco Rosé
This is made by someone who is both a grower and producer. Having tasted this style of product (earlier in the day) I was interested to get a better look at this style. A blend of Glera and Pinot Noir that's quite dry and fresh: subtle raspberry, fresh fruit focused with some texture on the back end and even a slight tannic note, which comes across as apple skin.  (*** ½)

Tenuta Amadio Agricola Rech Simone Asolo Prosecco Superior DOCG
Another look at Glera, this time it's fresh and lively with a lovely hit of lemon and lime, plus touch of orange peel, some Mac Apple and a gentle yeasty quality all made in a brut style.  (*** ½)

Azienda Vinacola Talamonti 2020 Pecorino Abruzzo DOC Superiore "Trabocchetto"
Pecorino is one of those funny named wines, but there's a good backstory as to why it is named as such and usually makes for a pretty good pairing wine for seafood: salty and lemony with notes of pineapple, grapefruit pith and delicate white flowers. Good texture and acidity with a lovely dry finish. (*** ½+)

Giacomo Vico 2020 Roero Arneis DOCG
Arneis seems to need help in the acidity department; here is yet another that makes for a nice summer sipper because it's soft and easy to consume with notes of apple and orange blossoms - there's also a nice saltiness to the finish.  (***+)

Giacomo Vico 2018 Langhe DOC
It's Nebbiolo, the grape of Piedmont and the grape of Barolo, but here it's used as a simple red wine (that's not so simple) - big on acidity and freshness with notes of sour cherry, raspberry, cranberry and red currants; this iteration is a little on the lean side, but still quite food friendly.  (*** ½)

Azienda Agricola Calafe di Petrillo Benito 2019 Irpinia Aglianico DOC
There's a richness of plum and black cherry right from the get-go; then comes a smoky note with a touch of vanilla - there's also a bit of chalky-gritty texture to the finish with subtle oak notes. Nicely layered wine.  (****) 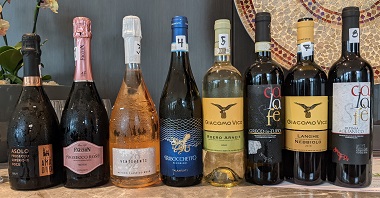