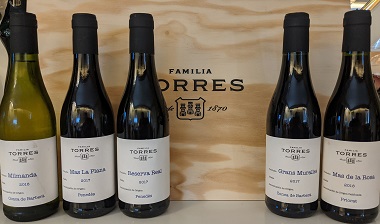 (November 2021) ... Torres has started a new initiative. Called "regenerative viticulture” over the years Torres has backed many initiatives to help give back to the land: lowering their carbon footprint, is but one example. We have interviewed Miguel Torres Maczassek on our podcast (Two Guys Talking Wine which can be found here) about many of them. We’re hoping to grab him again for this one in the 2022 season.

Today, Miguel joined us via zoom to discuss the wineries latest projects and, of course, wines.

The Torres place in wine dates back to the 16th century, with their first “winery” in the Penedes dating back to 1870 in Villa Franca, it has been 100% family-owned through the five generations of its existence.

According to Miguel, Torres started to really notice the effects of climate change in 2008 and figured out how they could lower their carbon footprint (to have the "lowest possible") - they met their previous goal (30%) and have now set a new goal (60%) and to achieve carbon neutrality by 2050, though they are on track to reach it 5 years earlier (by 2045). They are also looking to plant grapes at higher altitudes, in an attempt to keep a sense of freshness in their wine, and they are attempting to discover (or rediscover) lost varieties like: Forcada, Moneu, Garro, Pirene just to name a handful they have already found.

Now back to “Regenerative Viticulture" ... The main question facing the wine producer these days is about soil erosion and loss of fertility ... Here Miguel showed us several vineyard photos that had lost “topsoil” through erosion, when compared with the graft point on the vines themselves, which is where topsoil should start. Miguel realized that they were not just vine growers, but also needed to be experts on ground cover and studies are now underway to plant various varieties of grass as they try to breathe life back into the vineyard (aka: carbon). They have learned that mulching (carpet of cuttings) helps to keep the soil cool. A study of sheep (once a natural way to keep both soil and pruning under control) showed that a once plethora of the animal, numbering, some 26,000 at one point, had been lowered to a mere 3,000 ... These days it's about optimizing grass growing and getting additional life into the soil, ie: keeping carbon, and thus getting rich, healthy soils. The way to do that is to create more resilient soils – and they want to bring their ideas and findings to 7.4 million hectares around the world... By doing so, they will help preserve fertility in the vineyards from everywhere. It's a lofty goal, but one that must be done to keep the wine industry and grape growing, viable for the future generations.

And now... The current lineup of wines from the Anthologia Collection. These are the "creme de la creme" of the Torres wines from Spain ... This year the wines came in 375 ml bottles, so they could be enjoyed a few times through the course of the day; to assess their aging potential. 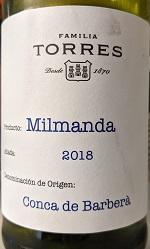 Torres 2018 Milmanda
Chardonnay
A little richer than you would expect, spicy, vanilla, smoky – but with a very pretty nose - needs to be cold to be enjoyed, as it warms it loses some of that nice character. Touches of vanilla, apple, almond, apricot. Decent acidity.  (*** ½+)

From the winemaker brochure: Milmanda was part of a route of medieval castles that gave shelter to Christians during the time of the reconquest. In the XIIth century peace came to these lands and vinegrowing began anew. Today, it is at the foot of these castle walls, that the Torres family grows the Chardonnay that produces Milmanda.    Partial malo (20%) / aged in 300L barrels (80% new) all French / 4-6 months / 10 months on lees in vats 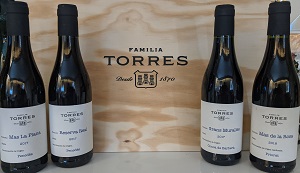 Torres 2017 Mas La Plana
Cabernet Sauvignon - from the Mas La Plana vineyard
Lovely dark cherry and spice, with plum and licorice - dark yet juicy, subtle smoke, black pepper and acidity sit on the back palate with a little mocha and raspberry, plus pencil shavings. This is almost a fruit bomb, but it’s backed with so many layers plus great balance ... fresh and lively, good tannin structure.  (****+)

From the winemaker brochure: The first vintage of Mas La Plana was in the year 1970 with the name ‘Gran Coronas Etiqueta Negra’. The wine soon gained international recognition, winning in 1979 the Wine Olympics in Paris, organized by the Gault-Millau magazine.  The best French wines participated in this competition.  In its beginnings, the wine incorporated small amounts of Tempranillo, but the main variety was always Cabernet Sauvignon.  Since 1978, the wine is made exclusively with Cabernet Sauvignon. Penedes, the second oldest wine region in Spain – started 2700 year ago or more / 29 hectares vineyard / dry vintage - good vintage for reds / 18 months French - 60% new

From the winemaker brochure: Reserva Real was first produced in 1995 following up the visit of Juan Carlos I, King  of  Spain,  to  our  winery.  Reserva  Real  is  one  of  our  “Antología”  wines  with  a  very limited  production.  It comes from a very strict sorting of the best Cabernet Sauvignon, Cabernet Franc and Merlot from one of our parcel of Les Arnes (4 hectares only).    Slate vineyard / hot vintage uses more Cab Franc - mild vintage more Merlot / always Cab Sauv dominated: 61% Cabernet Sauvignon / 26% Cabernet Franc / 13% Merlot.

Torres 2017 Grans Muralles
Garnacha, Cariñena, Querol, Monastrell, and Garró
Floral, slightly smoky with a mineral character and lovely array or red fruits. Good acidity and lovely red-floral notes on the palate, tannins are non-aggressive, with red peppercorns on the finish. Ready to drink now, but has a good 10 years ahead of it ... fresh and lively, well balanced and drinkable.  (**** ½)

From the winemaker brochure: This wine owes its name to the walls that protected the Poblet Monastery from mercenaries and wars.  The unique identity of Grans Muralles rests on the stony slate grounds (Licorella and Granite) of the region and the grape varieties grown there.  A century after the phylloxera plague, the Torres family managed to recover native varieties believed to be extinct such as Garró or Querol using modern viticultural techniques. These grape varieties together with Cariñena, Garnacha and Monastrell, preserve the spirit of this unique wine. Name means great or grand wall / deep slate soils / slow ripening / 44% Carinena - 38% Grenacha - 10% Querol - 5% Mourvedre - 3% Garro / first vintage 1996 / in 2009 Querol was added.

Torres 2018 Mas de la Rosa
Carinena / Garnacha
Very delicate wine, it’s a field blend of two grapes (listed above): floral and spicy, good acidity, red licorice, strawberry and cherry. Soft, supple and tasty - light in colour, but robust in flavour and great finesse. Miguel likes this wine because it has an "exciting edge", I would tend to agree.  (**** ½)

From the winemaker brochure: Mas de la Rosa is one of the most hidden and beautiful valleys in the Priorat, a place that historically was one of the first inhabited “masías” (Catalan word for farmhouse) in the area of Porrera. The whole vineyard field blend of Garnache & Carinena is about 80 years old, planted in “bush vines”. The vineyard only gets the morning sunshine, due to its orientation, and this, together with an altitude of about 500m above sea level and its aeration, provide a wine with naturally fresh characteristics. Smallest vineyard they have: 1.9 hectars / pre-1945 planting / first vintage 2016 / from the Priorat / "heroic viticulture" used due to the slopes / 60-40 Carinena Grenacha split (approximately) / short maceration on the Carinena (3-4 days) to keep it soft and approachable.