(May 2022) … Some of the wines below are barrel samples, and therefore are given a Good / Better / Best rating for potential in the future. Any wine that is finished and in bottle is given a star rating.

The best versions of these wines have an approachability early, which is rare, but getting less so, and that’s great news for the Sagrantino brand. Instead of having to sit on your bottles for 20+ years and hoping the fruit outlasts the tannins, we get to have our fruit and drink them too. The key seems to be pulling back on extraction and trying to keep those tannins at bay. Many producers are finding a way.

A Quick Note About the 2014 Vintage Wines: 2014 was a horrible vintage (according to many winemakers in the area), but they are starting to come around and be drinkable at a very early age; yes they taste older than they should, but then you get a feel for what older Sagrantino tastes like sooner. If you have any 2014 Sagrantino, pull them out and drink ‘em up.

FOUR STARS and Above (with notes)

Briziarelli 2016 Sagrantino DOCG Vitruvio
There's a real mocha note in here, plus some caffe latte and even smoky characteristics, but it’s all in that Starbucks kinda way – interesting wine, fun to drink and great with a coffee rubbed steak. (****)

Bocale 2017 Sagrantino DOCG
The fruit explodes here: cherry, mocha-blackberry and cassis with a smoky component to make it interesting. (****)

Colpetrone 2014 Sagrantino DOCG
Expressive, but also subdued: mocha with some blackberry and smoke; not over-powering, nor are the tannins over-whelming (****)

Perticaia 2015 Sagrantino DOCG
Now that's a very flavourful Sagrantino. There's a juicy character upfront, and a smokiness to the finish. The fruit is dark and almost lush before the tannins take over. (****+)

Tabarrini 2017 Sagrantino DOCG
Tannins are there, but not over-powering, it's the fruit that sneaks up on you and takes over. There’s also it's dark and bittersweet chocolate on the finish. (****) 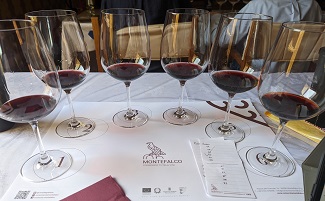