(May 2022) ... I was invited to Trasimeno, as part of a larger Umbrian tour that started with Sagrantino ... The draw for me here was a grape called Trasimeno Gamay; I thought: "Gamay? in Italy? ... This might be very interesting" ... It was, but not at all what I expected

Trasimeno DOC is a place on the water by Lake Trasimeno, which is from where the region takes its name - we spent a good part of our first day there on the water taking in the sights and sounds of the lake - and getting a vineyartd tour

by water. It is a small appellation with only 15 members in the consortium - the notable parts of the land are the hilly slopes that gently descend towards the lake. The DOC is in the province of Perugia and, as with much of Italy, has a long history of grape growing and wine making. The DOC includes six municipalities and parts of four others. 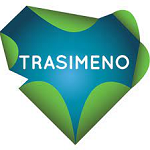 The original consortium started in 1997, but in 2017 they had a renewal of their name and their logo, let’s call it a “re-branding” – changing to Trasimeno Consorzio Tutela Vini and the new logo represented more of the true identity of the region: the blue in the centre represents the lake, surrounded by green, to represent the hillsides. As with any consortium, there is a mission, that it must fulfill for itself and its members, in Trasimeno it's all about the Trasimeno Gamay.

This variety comes to the area in the 16th century, during the time when the Spanish dominated Central and Southern Italy. Being that the Gamay we think about from Beaujolais does not have roots in Spain, you can start to believe that maybe this is not traditional Gamay, and you would be correct. In truth, this gamay a is part of the Grenache family and is more closely tied to the Sardinian Cannouau, Lugurian Granaccia, and Tai Rosso (from the Berici Hills) then it is traditional Beaujolais-ian Gamay. The grape comes by its name honestly though (and totally by accident), it is a cultivated using a French technique, and because it is bush vine train, like Beaujolais grapes, it had been deemed to be Gamay many years ago.

The area has three major grapes, the red is Sangiovese and the aforementioned Trasimeno Gamay, for white wine production, Grechetto is the main player. And while Grechetto is used primarily for white and Sangiovese primarily for red, the Trasimeno Gamay grape can be found in all manners and styles: red and rosé, still and sparkling – so far there was no mention as to if anyone has tried to make it white.

Breaking down the bottles ...

* A quintal is a unit of measure equal to 100kg 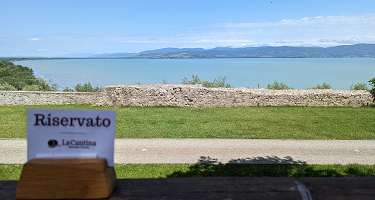