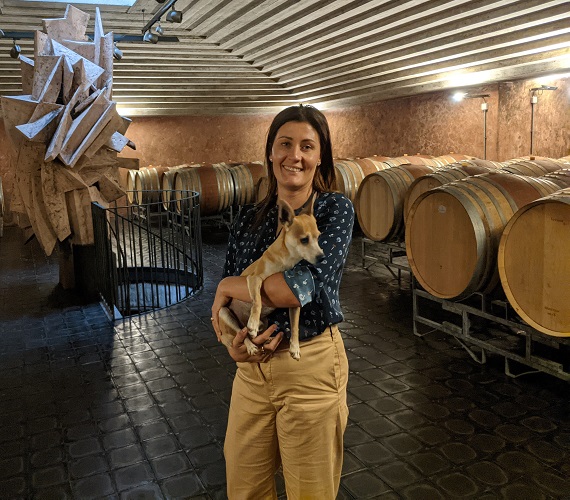 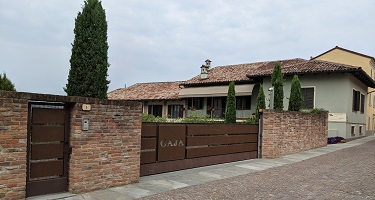 (September 2021) ... We met with Gaia Gaja at their cellar door in the middle of the street... Not the great green gate with the name “GAJA” on the outside (though we did go behind the iron curtain later). From here it’s a short walk with her (and Briss - her dog she rescued during a 2400 m mountain hike) to one of their vineyards. Our walk took us to the Sori San Lorenzo Vineyard where we discussed all kinds of viticulture practices, nursery programs to find the best and most disease resistant clones - plus a new nursery project in the works, plus the difference between monoculture and polyculture in the vineyard: “Viticulture is trying to cultivate life,” she said, “that's why you can't just have one thing in your vineyard, because life evolves and grows and needs other stuff around it to feed off of and stimulate more growth.”

The Gaja winery we see today did not originally set out to be a winery, it started as a tavern and saw the opportunity to make wine as something else to serve their patrons. The first commercial wine to come out was in 1859 ... The tavern would close in 1902 - as the winery took off as a full-time business. The original tavern still exists behind that great green Gaja gate, and the original door is still there and Gaia says one day she might just re-establish it as a tavern (maybe), though she might just be kidding (or maybe not). 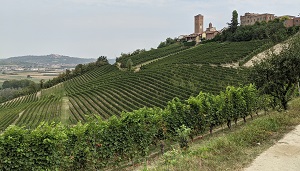 Gaja owns 14 vineyards in Barbaresco and for Barbaresco to be produced and called as such it can contain no north facing vineyard slopes - as they are considered too cold and will not ripen the grapes properly (ie: to their fullest potential).  Surprisingly, the first ever vineyard planted by the Gaja family in the region was in 1983 and was not Nebbiolo - it was Sauvignon Blanc. Today, they grow an assortment of both indigenous and international varieties:  Chardonnay, Barbara, Cabernet Sauvignon and yes Sauvignon Blanc. At Sori San Lorenzo the oldest vines are between 65 and 70 years old in a vineyard 2.6 hectares in size.

Interesting to note, the Cabernet Sauvignon they use was planted in 1978 and is made into their wine called Damargi, meaning “too bad”. 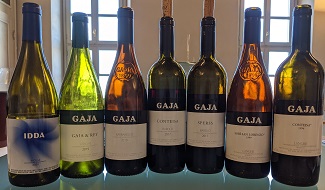 2020 Idda
A joint venture with a Sicilian producer, Alberto Gracy, using the white grape Carricante and first produced in 2019. "Idda" is a Sicilian dialect meaning she - which refers to Mount Etna as in “Idda is angry today” ... But this wine is not angry - in fact it is quite refreshing with citrus pulp and pith, but also with a charred lemon saltiness and smells of pistachio shells (salted, of course).  (****)

2019 Gaia and Rey
Vines planted in 1979 (Treviso) and in 1988 (Serralunga) go into this Chardonnay: notes are of salty, lemony all with good acidity ... The wine has nice structure with lemon drop notes - it's opulent, clean and yet refreshing ... But Italy is still not a place I think of for great Chardonnay (someone prove me wrong, please).  (*** ½+) 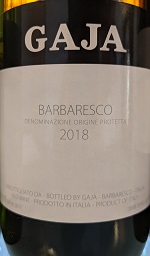 2018 Barbaresco
Barbaresco may be the most misunderstood wine of the Piedmont region, especially when compared to the more popular and more known Barolo. It is still made with the Nebbiolo grape, grown at a maximum of 8 tons per hectare, it spends less time in wood and is therefore released 1 year before Barolo. As for the 2018 vintage in the area, it was one of challenges: "crazy vintage" was the phrase used to describe it - rain in the beginning, then hail damage … so many problems that the 2018 single vineyard offerings were "lost" and went into this straight Barbaresco; but the single vineyard loss makes for a more upscale base-model Barbaresco: lovely and fruit forward with both red and black fruit taking a turn on the palate - vibrant acidity with notes of both earthy and floral adding complexity offset by gentle tannins - light, fruit forward, incredibly aromatic and well balanced. It's a beauty for a “crazy vintage”.  (****+)

2017 Conteisa - Barolo
Grapes come from the Cerequio vineyard from a season definitely better than 2018. Lovely, fresh dark fruit, spiced oak and smoke with plenty of dark spices to keep the palate interested; and that dark fruit just won't quit - plus there's plenty of herbal notes, which includes anise and clove on the medium length finish.  (****) 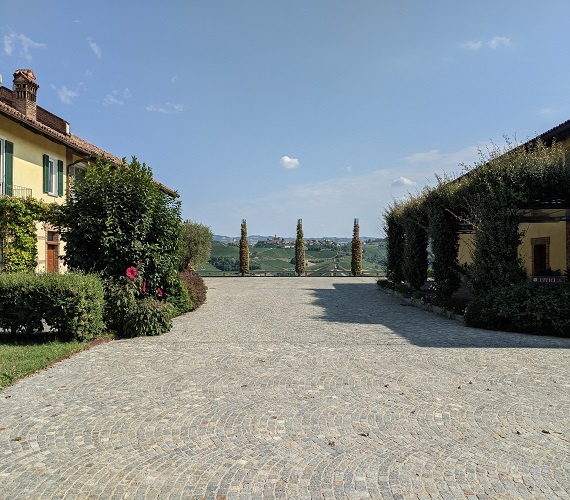 (September 2021) ... Visited on the same day as Aurelio Settimo, two very different wineries - not necessarily in approach, but certainly in size and in history. Today I’m visiting with Alberto Cordero di Montezemolo who runs me through wines and the history of the property / winery.

Cordero di Montezemolo has inhabited this land dating back to 1390 and have one of the highest concentration of contiguous land holdings, 28 hectares (the region is broken down into many different producers farming very small blocks of land, some in different locales) - Cordero di Montezemolo farms a total of 56 hectares, many in larger blocks - besides the usual suspects of Barbara, Dolcetto and Nebbiolo they also have some Arneis (9 hectares) and Chardonnay (2 hectares). Their vineyards are located at about 300 m above sea level and are certified organic. They produce 300,000 bottles a year, of which 70% of that gets exported.

On their land, in one of their vineyard, and perched on top of a hill, they have one of the most iconic symbols of the region: The Cedar of Lebanon - planted in 1856 to celebrate a marriage within the family.

Historically their wine cellar was located in La Morra - about 4 to 5 km away, but up a long winding road ... back then they carried much of their grapes by horse and cow drawn carts - in the 1979-80 they finally had had enough and Alberto's father decided it was time to bring the production facility closer. It is because of this decision that the building that currently houses the production facility / cellar is now in the middle of the vineyard. According to Alberto, many of the innovations and changes of philosophy towards grape growing and away from mixed farming came in the '80s when the grapes took center stage.

Also interesting to note that most of the vineyards in the region sit no more than 500 m above sea level - after 600 m growing becomes "more difficult, not impossible, but certainly more difficult," says Alberto Cordero di Montezemolo, but they are continuing to look higher with global warming a definite issue.

Cordero makes three Barolos, two single vineyard (Enrico VI and Gattera); plus they're mixed vineyard bottling and flagship, "Monfalletto". There is a fourth Barolo, a premium bottling only available at the winery and only bottled in Magnums: Gorette, which was started in 1998 as a “highly collectible wine” - only a certain number are produced each year, and each bottle is numbered - upon purchase the bottle is registered at the winery.

The Wines ... (all wines are single variety) 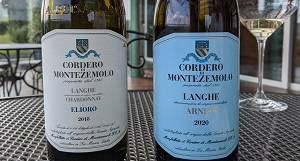 2020 Langhe Arneis
Sourced from three locations: La Morra, Roero and Alba ... It's a floral, citrus, melon and Mac apple white that's fresh and lively - an everyday wine with good acidity that’s best drunk on a hot day on the patio (as we did).  (*** ½)

2018 Elioro - Langhe Chardonnay
Some may question if Chardonnay belongs in this region - for me the question still hangs out there with no real answer. This is a 5,000 to 6,000 bottle output every year and it is said to be in a "Burgundy style", but if I wanted Burgundy wine why not go right to the source? It spends one year in oak and one in bottle before release: it's buttery and has a thick texture in the mouth, making it rich with notes of spiced-apple and dried-apricots all backed by good acidity. My real question is: can they not make a Langhe-style Chardonnay, instead of trying to create something already being made?  (*** ½)

so called because they mainly see no oak (or limited oak) and are an expression of the grape, not the place (ie: terroir)

2020 Dolcetto d'Alba
They make only one Dolcetto (the grape that used to be the king of this region) and in 100% in steel. I have never been a fan of Dolcetto, but this one seems to have won me over with lots of cherry and rhubarb notes that come across fresh with a good fruit core and a dry finish ... Reminds me somewhat of a Beaujolais; for sure a chill-and-kill (the bottle) kind of wine.  (*** ½+)

2020 Langhe Nebbiolo
Taken from their youngest vines (approximately 5 to 7 years old) it's light and fresh with notes of cranberry and cherry. There's a richness of fruit and a freshness that makes this one pretty easy to drink; plus, the fruit is all raspberry and strawberry with a little touch of floral.  (*** ½+)

2020 Barbera d'Alba
An all-vineyard blend comprising both young and old vines, they all see 5 months in oak and the result is black cherry and floral with hints of vanilla and a really good acid punch. Fresh and very fruit forward.  (*** ½+)

2017 Barbera d'Alba Superiore "Funtani"
This is the "old vine" blend, some that are 60-plus years old, it also sees a minimum of 15 months in oak (depending on the vintage). Black cherry pulls forward with notes of licorice, gentle spice and smoke - there's a real intensity here, mostly of fruit, but there is also a nice tannin backbone (non-aggressive) with a medium length finish and mocha linger.  (****) 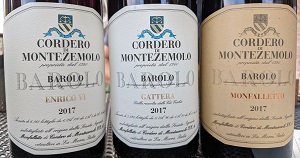 2017 Monfalletto
This is the calling card of the winery, a 50,000 bottle output all vineyard blend. Cloves and dried strawberries with an herbal backing - an intense palate with gentle smoke and spice. A good expression of Barolo.  (*** ½+)

2017 Gattera
This wine's output is only one tank, they pick the grapes from three spots in the vineyard that they know (and have traditionally been) good selections for this offering - the berries are very small, creating a more concentrated wine. Lovely red fruit forward expression with notes of herbal and mocha, plus a spicy finish; as it opens there's more intensity to that spice, but it always surrounded by that red fruit core and the finish is long and elegant. It's a wonderful wine with real character, it’s a wine that whispers in your ear "love me" - which is so easy to do.  (**** ½)

2017 Enrico VI
Vineyard named for the sixth son who was born on the purchase date of this vineyard and I'm sure none of the previous children had any problems with that? This is the darker side of Barolo at Cordero with smoky, herbal and earthy notes ... Tannins are chalky and aggressive, the wine is powerful and lingers around like a stalker outside your workplace. For lack of a better term, it's the masculine side of Barolo - and in Italy that is neither brutish nor politically incorrect as a descriptive term. So please don’t take it as such.  (****)

Alberto also opened a 1967 Barolo (54 years old) that was still lively with its acidity, but also gentle and soft across the palate ... It was a lovely way to end the present day tasting with a dose of the past. 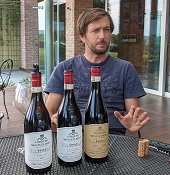 Also noted as Alberto listed off the vintages and designated then either “good” or "bad" Barolo years, it was noted that the 1972 vintage was "canceled" for Barolo - meaning, if you have a bottle of 1972 Barolo in your cellar - it's probably not a Barolo, or at least not an authorized / recognized one. It was that bad a harvest.