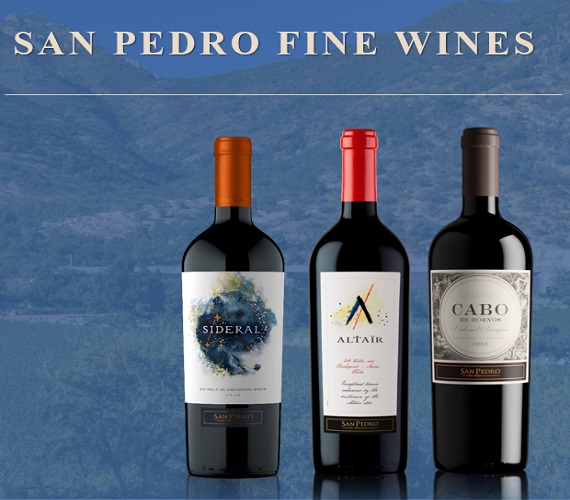 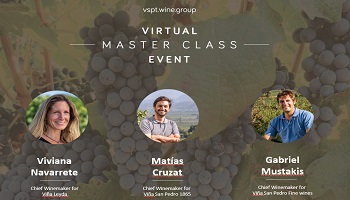 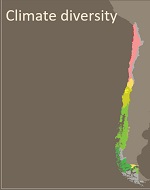 As with most Chilean focused events they always start with the facts and figures about the country:

The country is 4329 km long and boasts a wide variety of climates. Vineyards lie, from north to south, 24° to 40° south latitude and the diversity in climate ranges from Mediterranean (cold, warm and hot) to desert (arid to semi-arid) cold to hot. Diversity is definitely the name of the game in Chile. The country continues to grow its plantings in regions from north to south with names from A (Atacama) to V (Valparaiso); since 2009 to 2018 the increase has been +25,667 hectares across all red varieties and key white varieties (Chardonnay and Sauvignon Blanc). Chilean producers continue to learn about their country, it’s regionality and what grows best where. What is nice to know is that old dogs in Chile are still interested in new tricks: a company, like Vina San Pedro, with over 150 years under its belt, is not just sitting on its laurels, but takes the history it has and realizes it has some learning to do … and does. That’s a huge positive for continuing to grow their industry.

Founded in 1865 (which is where the line of Vina San Pedro 1865 wines takes its name) in the Curico Valley. They export to over 80 countries and have plantings of over 2400+ hectares spread over the most important viticultural regions of Chile, and even some minor ones. They have learned the best valleys for certain varieties for use in their best wines: Maule Valley for Carmenere, Maipo Valley for Cabernet Sauvignon and Elqui Valley for Syrah.

The Estate Vineyard for San Pedro is located 110 km south of the Chilean capital of Santiago, it has a 90 hectare planting with five varieties. It lies 500m above sea level, gets 300 to 450 mm of rainfall per year, and 1800 growing degree days (a measure of heat accumulation).

Vina Leyda & The Leyda Valley (Why There?) …

Within the Leyda Valley there are 1900 hectares planted with 10 producers; it is considered a cool climate valley and is compared to such growing area as Sancerre, Marlborough, Cote-du-Nuits, Salem (Oregon) and even Niagara-on-the-Lake … yet with less rainfall (250 mm / year), higher average temperature (13°C) and growing degree days less than four of the other five, including Niagara-on-the-Lake. With all these comparisons you can see why the Leyda Valley is good for cool climate loving varieties like Sauvignon Blanc and Pinot Noir.

Vina Leyda sits on the west side of the coastal mountain range, four kilometres from the Pacific Ocean and 40 km Southwest of Casablanca / 95 km west of Santiago (for those who know their map of Chile). Vina Leyda was the first to plant vines in the valley (1998) and were the first to release a wine under with the Aconcagua Valley DO regionality on the label (think of the DO as the same as the AOC in France and DOC in Italy). Today they have 164 hectares planted.

The Wines Across the Properties …
(in alphabetical order, arranged by year)

Vina Leyda 2016 Kadun Sauvignon Gris, Single Vineyard (coming to LCBO in 2021)
Described as being “between Sauvignon Blanc and Chardonnay” and is a clonal mutation of Sauvignon Blanc found primarily in Bordeaux and Chile. This has a nice rich mouthfeel with notes of ginger and subtle white fruits and a spicy kick on the finish.  (*** ½+)

Vina Leyda 2016 Pinot Noir Lot 21
There’s a little bit of everything when it comes to the winemaking of this wine: whole cluster, barrel age, concrete age, no toast, you name the procedure it was probably used. As for what it has derived there’s an earthy, smoky, peppery nose which leads to a palate that has much of the same, plus there are some black cherry and cran-cherry notes. The finish is smoky and earthy.  (*** ½)

Vina Leyda 2018 Garuma Sauvignon Blanc, Single Vineyard ($16.95 - #99309)
Lots of grassy, herbal notes on the nose with some green pepper backing, it has a much rounder mouthfeel than one would expect, plus all that grassy/herbal of Sauvignon Blanc comes through while the acidity seemed to be softed.  (***+)

Vina San Pedro 2016 Altair
A blend of primarily Cabernet Sauvignon (78%) with Cabernet Franc (13%) and Syrah (9%) adding some much-needed seasoning; aged 16 months in French oak, of which 50% is new. The nose kicks off with that very Chilean note of mint along with blackberry and smoke. The palate is smooth upon entry with a little spicy and tannin bite back on the finish. Mid-palate is where the action is: spiced black chery, smoked-plum and Christmas spices mix with that minty note, blueberry skin and some bittersweet chocolate. This is one to hold a few years or enjoy over the course of an evening where you can watch it open up.  (****+)

Vina San Pedro 2017 Cabo de Hornos Cabernet Sauvignon
18 months of barrel age, 50% new, and aged a further 8 months in bottle before release. Smooth and silky on the palate with lots of dark fruit and pepper; the nose is loaded with mint and black cherry while the finish wraps the whole thing together in a lovely combined package of black cherry, chocolate and mint.  (****+)

Vina San Pedro 2018 Sauvignon Blanc, 1865 Selected Vineyards ($18.95 - #375212)
The nose does not take on the usual Sauv Blanc character, this one leans a little herbal, eucalyptus and even has a hint of pronounced basil; the palate is a savoury selection of notes with stone fruit (ie. peaches and nectarines) plus some lime zest – the grassy (if even there) is so in the background it’s barely noticeable.  (*** ½)

Vina San Pedro 2018 Sideral ($27.95)
A blend of primarily Cabernet Sauvignon (72%) with Syrah (18%), Cabernet Franc (4%), Petit Verdot and Carmenere (3% each) – this wine screams Chile to me with its minty character that hits right from the start both on the nose and palate; lots of red fruit plus the addition of subtle black and blue fruits and a nice mineral note … nothing weighs the wine down it, it is fresh, fruity, lively and a pure pleasure to drink.  (****)

This was not what I expected but is definitely a delicious bottle of wine. It kicks off with a silky-smooth entry but ends with a peppery kick. On the mid-palate you’ll find blackberry, cassis, black cherry, dark cranberry and a shake of white pepper. The acidity keeps the sweet middle in check and as it opens there are hints of mocha and licorice that are able to slip in for added complexity.  (****+) 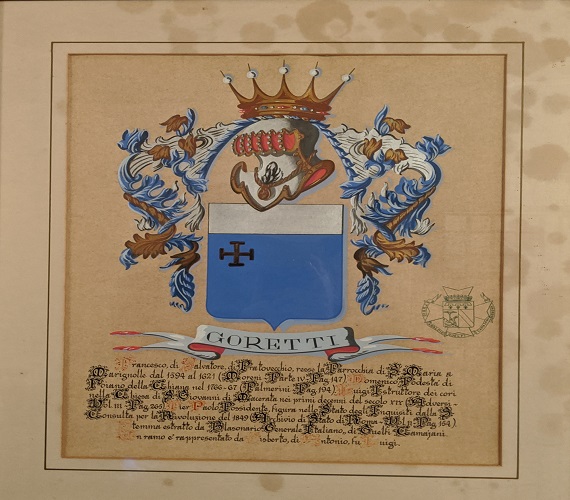 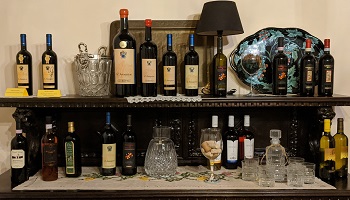 (February 22, 2020) … My first evening in Umbria was spent with the Goretti sisters, Giulia and Sarah, with whom I had previously met the year before and was so impressed with their wines that I attempted to put

them in touch with an agent in Ontario / Canada. I do not believe their wines are not here yet, but they are certainly working on it (I definitely need to be updated on how that’s going). The sisters are outgoing, personable and passionate about their wines. The property is on fringe of the Sagrantino area (it was a good 30-minute ride to get there). On another note, their mother is an amazing cook who has published a cookbook and teaches cooking classes at the estate … “Dinner” was simple but simply delicious, nibbles and finger foods, put together by mama - then we got to the wines.

2018 Grechetto … The nose is fresh with peaches and lemons while the palate balances sweet white fruit with acidity: citrus, under-ripe pineapple, lemon drop and even a hint of floral … fresh, lively and something I could have sipped on all night long (or better yet, on their terrace through the afternoon).  Rating: ****

2016 Il Maggio, Grechetto … This is the more “serious” version of Grechetto, having spent six months in medium-toast French oak (where it is also fermented). The barrel regime is 50% new and 50% one-year-old … the acidity is still present, helping to balance the vanilla and apple notes while lemon zest and other citrus peels kick around on the finish. Even with the new oak there is still a freshness factor to this wine.  Rating: *** ½

Then came the inevitable look at Sagrantino – a four vintage vertical flight that incorporated 2010 / 2012 / 2013 and 2014 … the interesting part is that midway through the flight there was a change in style to the wines – I was informed after all the tasting was done that a new winemaker had come on board for the 2013 vintage, this new style added elegance to these usually powerful wines: 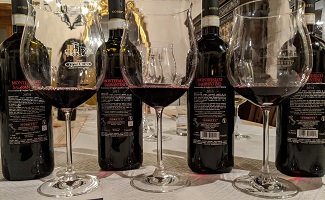 2010 … Red and black fruit combined on both the nose and palate with some vanilla, smoke and still very rugged tannins.

2012 … This younger Sagrantino had a more early-drinking profile than the 2010 – the fruit was rich and red while the tannins had a pleasant softness.

2013 … The switch in winemaker probably attributes to the silkiness of the tannins; the dark fruit and cocoa notes come to the fore while showing off an elegance (with power, the iron fist in a velvet glove analogy comes to mind here.

2014… A tough vintage, but one that was able to add a dimension of red fruit to a dark fruit core, and when compared with other years this Sagrantino came across a little lean and thin – but that could be mistaken for the “elegant” note discussed in the previous vintage – time will tell with this wine, but to me it seems more a drink-sooner than later kind of wine. 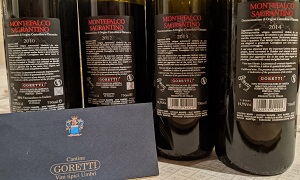 Now stay with me if you’ve heard this before … and if you are a follower of my International Video Series you might have … but the L’Arringtore, that I am about to introduce you to, is a wine I wish was always available to me and if you have not watched me wax poetic about it you can find it here – otherwise let me describe it to you in words below:

2015 L'Arringatore … The first vintage of this wine was back in 1991 and the name means “the orator” or “the speaker” … it comes from the notion that wine is a conversation starter. It’s a special wine made from 70% Sangiovese, 20% Merlot and 10% Ciliegiolo (a grape native to central Italy) of which only three-hectares are grown by Goretti. This wine truly has character: soft and round yet spicy with dark fruit, vanilla, dark cherry, chocolate and good tannin structure … it’s a wine worth talking about, and talking over. Sadly, it is sold primarily in Umbria, but also has a following in Japan, because of its name, which sounds similar to “Arigato” (“thank you” in Japanese) … by the end of our evening the finish leaned a little more on the sweet red fruit side but it was still a delicious bottle. I highly recommend this wine to anyone who can get their hands on it.  Rating: ****+ 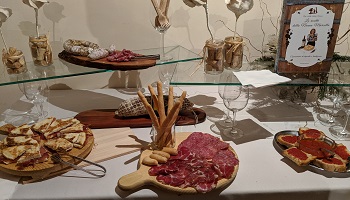