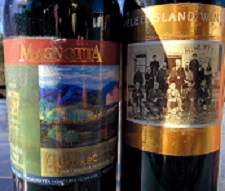 It all started here(April 18, 2015) ... Wow ... what a nice day - and we're sitting on the back deck just wondering when spring will officially arrive, when I get a call from a colleague, Andre Proulx, who happens to be in the area with some friends of his own and wants to know if he can stop by. I always like when people come by, especially those that I can subject a plethora of older Ontario wines to - and Andre is more than game - so he swings by, everybody takes a chair, glasses are distributed (spit cups are un-necessary in the great outdoors) and here we go ...

We started with a Pelee Island 2003 Vinedressers Cabernet Sauvignon - Vinedressers, for those of you who don't know, is the pinnacle of Pelee Island wine-making and rarely sees the light of day outside the winery. 2003 was a 'weak' vintage in Ontario, but if anyone is going to be able to ripen Cabernet Sauvignon in this year it is going to be Pelee, being the southern most point in all of Canada.  Low and behold, for a wine no one had any hope for this wine actually came through:  the nose still showed off fruit character, raspberry and blackberry, while the palate is the place where the wine showed its age, mainly with dried raspberry and leather, there was also a slightly smoky note along with gentle oak ... it turned out to be rather tasty wine and it was one of only a few people asked for seconds of.

Next up was a disastrous bottle of Magnotta 2001 Limited Edition Cabernet Franc, there's no way to put a nice spin on this, it was lady-bugged all to hell ... that was the year Ontario encountered this problem and, yes this wine was not spared ... on to the next. (Lady bug taint becomes more apparent with age) 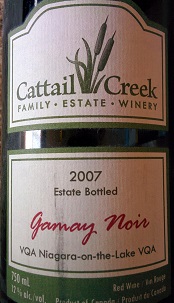 One of Niagara's boutique wineries, and unsung heroes of the Gamay grape is Cattail Creek, and I decided to pull out a bottle of 2007 Gamay Noir, because I know that Andre, like myself, is a Gamay fan.  For an 8 year old bottle of Gamay this has held up exceptionally well.  The nose had smells of cranberry and sour cherry, blind we would have sworn we were sniffing on a Pinot Noir, not its poor cousin, Gamay.  Palate was a lot fresher than expected: lots of cherry, raspberry, strawberry, and mulberry - everyone around the deck seemed to find a different berry to put into the mix of flavours ... and they were all impressed - well I know Andre and I were so that was all that counted.

The next bottle I let Andre pick and he commits what is paramount to infanticide by picking a baby: Lailey 2007 Cabernet Sauvignon ... the 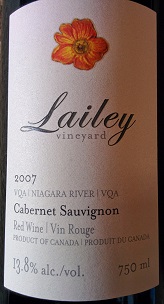 nose is coming into focus with lots of cherry, chocolate, cassis aromas, but the palate shows its still youthful and not quite ready; the tannins are still harsh, but there is some dark fruit peaking through and with time open if started to show itself even more, there was also plenty of oak characteristics and spice ... we finished this bottle before moving on - seemed a crime to waste it ... so we savoured it slowly.