Taste it Again / Lost & Found: Six On the Deck 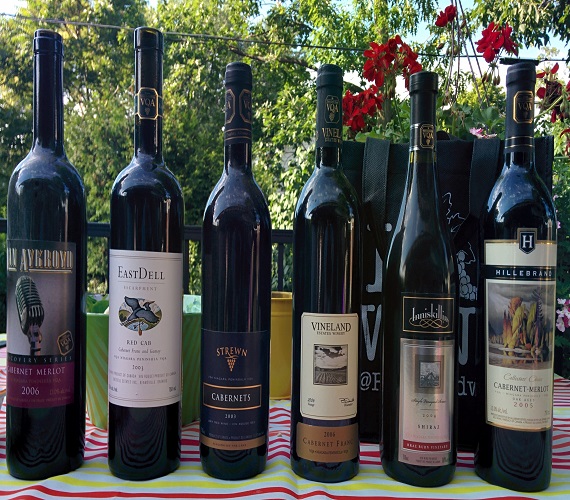 Another gorgeous summer day and we invited guests to sit around for dinner and drinks on the deck - one of those in attendance was my buddy Larry, who never fails to have a good time no matter how many suspect wines I throw at him. The last time we did this was the dozen or so bottles I open for the Super Bowl ... Today it was 6 conveniently "found" bottles of borderline Ontario ... Starting with a bottle of Dan Aykroyd 2006 Cabernet-Merlot, and all I can say about it is exactly what I wrote on this very day, "plastic cork on a mediocre wine results in a piece of shit 9 years later" - this was never going to be a bottle built for longevity so there was no surprise here. End of story, let's move on.

Our next bottle was another of those "What the Hell Were You Thinking" wines that should never have seen 3 years let alone 12: EastDell 2003 Red Cab, a Cabernet Franc-Gamay blend that was also under plastic plug. Oxidized and sherried all to hell, it smells bad and tastes worse (I for one could not spit this one out fast enough), what an attrocious mess and I have no one but myself to blame.

Caption TextBottle three was from the same year as the EastDell, but from a different winery, a Strewn 2003 Cabernet - a Franc dominated Cabernet blend: the nose was very oaky, smoky, and laced with severe green pepper aromas; palate showed more of that green pepper, while also being thin and weedy. Larry called it "classic old style Niagara" ... I'm glad we've moved away from this style (for the most part). This wine should have come with a sign attached 'Do not resuscitate, No defibrillator necessary' - this was pretty dead ... But I will admit I would have been surprised if it wasn't.

After those first three wines I'm sure Larry was wondering what makes him so special that I would subject him to these vile wines ... But then I try to redeem myself with the next three ...

Caption TextA Vineland 2006 Cabernet Franc, these are usually awesome wines and excellent value (under $15) and surprisingly age-worthy at that price point. The sweet/dried red fruit are the prevailing taste and aroma, in a blind tasting it would be hard to pick this out as Franc, but it is still quite drinkable with a pleasant hit of vanilla on the finish.

So now I'm 1 for 4 and we look down at bottle number 5, Inniskillin 2004 Shiraz, Brae Burn Vineyard. First, the name Shiraz is a sign of the times, Australian wine was big in 2004, but this lives up to neither the Shiraz nor Syrah name ... It's a little weedy and green from the get go and it sits poorly on the tongue with a very unpleasant finish ... I really thought this wine had such potential to be a winner, and first sip (or two) were promising but that dissipated quickly. Sigh.

So no matter what I poured next tonight I had a losing record (our last lasting I was 6 for 12 / 500 average) but now I'm 1 for 5 (if you're keeping score) and I pull out my final wine: Hillebrand 2005 Collectors' Choice Cabernet Merlot ... Bang! Outta the park - this wine had good dark fruit most notably cassis with oak, vanilla and nice tannin structure ... Easily the winner of the evening, but that's not saying much, this wine was 'the bomb', in a good way.

I poured one more wine ... I could not let the bad beat out the good by such a wide margin, so I reached into my bag of tricks for this Italian beauty (click here to find out)