(August 2, 2015) ... Over at my brother's house for dinner and as usual I have brought along a real mixed bag of wines from both Ontario and other parts ... Here we'll look at the four Ontario bottles: 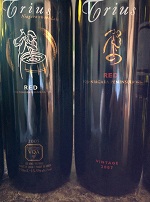 Starting with many an Ontarians perennial favourite, Trius Red, from the 2007 vintage ... The nose seems a little muted but the palate proved to be anything but, with its spicy red fruit and pepper notes, there's also a fun, kinda creamy, sensation mid-palate. I followed this one up with an older Trius 2005 Red, the aromas here came thru with smoky dried cherry, once again it's the palate that saves this one note nose: tannins and acidity still exist, and are the first to show themselves, then comes the dried red fruit and oaky finish with a white peppered-oak linger. Neither wine was considered outstanding, but neither would I class any as bad considering their age.

Keeping it in the family I opened a 2007 Peller Estates Cabernet Franc Private Reserve ... I have tried this recently and that earlier bottle was no fluke it's still awesome (you can find it amongst these bottles). The Stoney Ridge 2005 Wismer Cabernet Franc suffers the same fate, though it might just be even better than the last time I tried it - see review from earlier.

Check out the two other wines poured this evening.