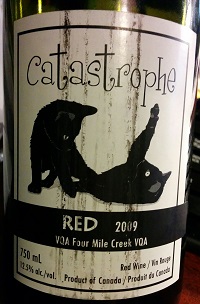 (March 8, 2016) ... This blend of Gamay, Merlot and Cabernet Franc has really stood up - granted the bottle says it'll have black cherry, raspberry, vanilla and hints of mint - but those are long gone. Today we're looking at a light bodied red in which the high acids of 2009 have held up nicely and have turned the wine more Pinot-esque then one would imagine based on the make-up, it has plenty of sour cherry and cranberry being offered up (not that there's anything wrong with that) - but in the end the wine is very pleasing and enjoyable; and surprisingly so.