(January 22, 2017) ... Atlanta trounced the Packers - New England beat up on the Steeler ... and thus the best day of football turned into a blow out ... and that means the best part of it was the wines on the table ... not all of them, but there were a number of good wines that showed well after so many years, there were also some notable disappointments ... let's take a look:

Lailey 2005 Zweigelt ... I'm sure I keep trying this bottle of wine over and over again, which makes me wonder how many I bought at the time, I know it was a good wine upon release but now it is harsh with really high acidity that dominates; it's boring and hard to drink

Angels Gate 2002 Red (non-VQA) ... This 51% Gamay / 25% DeChaunac / 24% Pinot Noir blend is odd, not only for its make up, (which someone in attendance remarked before the bottle was even opened: "what a waste of Pinot Noir grapes"); but it has not aged at all well: leathery, tarry, Pinotage-esque, and completely vile with no redeeming qualities what-so-ever ... I expected little from this wine and got even less.

*Malivoire 2009 Small Lot Gamay M2 ... Decided to move into a light wine before opening some of the others and this Malivoire did not disappoint. 7 years from vintage date and it is still a gorgeous bottle of Gamay:  Nose of cherry, raspberry, and cranberry, which followed on the palate with well-balanced acidity, I found it to be completely on point with the year it is from; turns more cranberry than cherry with time in glass. This inaugural vintage is still showing well, and may very well be the best bottle we tried today.

Magnotta 2002 Cabernet Franc, Limited Edition ... Back label was full of great information: new American oak for one year, brix levels and plenty more - the wine itself was very coffee/tobacco influenced with a slight oxidative note, which could be from the faulting cork (wine seeped up and stained top and adhered the capsule to the bottle), but we also found there to be well-integrated oak and what appeared to be a little greenness on the finish - but it does not leap out as great or appear to offend, so not great marks but neither were any bad.

Colio 2002 Cabernet Franc Reserve, Barrel Aged ... The first thing we noted was that the Magnotta was a better wine than the Colio, even with it's minor faults, this particular wine was dripping with oaky, smoky, dry and dusty wood character that never let up ... there was some black cherry-tobacco kicking around but not enough to power through the oak.

*Vineland 2009 Cabernet, Elevation ... Our second '09 of the day and it proved to also be a gem:  very drinkable, with good fruit, namely cassis, with hints of woodsy note (and why not, it had 18 months of French oak aging), and a little green, probably from the 6% Cabernet Sauvignon in this vintage, which was not a Sauvignon vintage by any stretch of the imagination - there was also some tobacco, subtle spice and good acidity. Nice job on this one.

*Ridgepoint 2010 Merlot / Cabernet / Aglianico ... Many thought this was going to be a shrug wine, but instead turned into a favourite; 24 months in French and American with some dried Aglianico going into the mix.  Nicely spiced with sweet black cherry, some notable appassimento aromas and flavours, plus vanilla; it straddles a fresh/aged note (due to the appassimento inclusion) and it drinks more youthful than it should - a solid red at this age.

Cattail Creek 2012 Cabernet Franc, Small Lot Series ... This was our only 2012 and there were high hopes in the room, after all 2012 was a surreal vintage, best Ontario has seen in a long time and one that all others going forward will be compared to; but this wine had a soft middle and decent spice, but it should be #1 with a bullet  among all these wines, but it was not;  it sat flat on the palate and especially in the middle where it was hollow and unappealing - in such a great year to have such a  middling wine seems incongruous . There's nothing exciting here, I gave it a 4+ upon its release, but now I would be hard pressed to give it a 3.5, drinkable but not exciting.

We moved on to whites and were resoundingly let down by a number of them starting with the Ridgepoint 2005 Riesling, Medium Dry (no character, NO acidity, sweet peach, pear and a sweet middle, but it just sat there); Viewpointe 2005 Riesling (also flat and uneventful, even kinda flabby; it was better than the Ridgepoint but not by much); and then came the Konzelmann 2006 Riesling (1), claiming it as "off dry" on label but the sweetness has long departed leaving sour, funky, and bitter notes leading to a real sour finish; really off-putting. 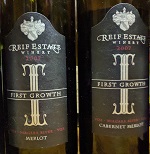 Featherstone 2006 Topaz ... This Riesling-Gewurzt blend was the best of a bad lot of whites: fun and funky nose with acceptable peach, lime, minerality, and some acidity - it was drinkable but don't smell it while you do.

Sunnybrook 2009 Bosc Pear ... There not much to say about this wine except it tasted like pear, and really what more do you want from a fruit wine; acidity is soft but it works.

The final two wines we all had high hopes for and they did not disappoint: Reif 2007 Merlot, First Growth:  good fruit, good spice, nice mellow mid; there was also some cigar, cassis, spiced-blueberry, vanilla, and cinnamon. Still lively and still a great drinking wine - not sure I would age it any more it's ready to go.  Finally, the Reif 2007 Cabernet-Merlot, First Growth - soft and easy with smoky-cassis, earthy, cherry, and more, it was interesting and definitely more complex than the Merlot, with a touch of white pepper on the finish.

See the Original Review by clicking name below
(the rest were "Lost" wines) ... 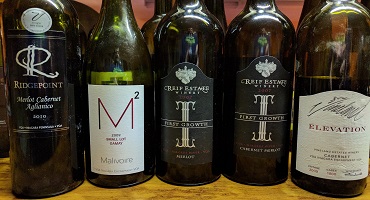