(October 3, 2018) ... Sitting across from my podcast co-host Andre Proulx we opened these old bottles of Vineland and let the verbiage come out ... I think we were both surprised at how good these two wines still were and the value they bring to the table, as both wines at time of purchase were under $25 ... 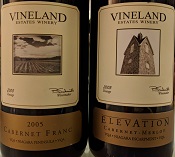 Vineland 2005 Cabernet Franc ... From a hot / good vintage and a winemaker that loves Franc, so you must have a little faith it's going to hold up, even 13 years later: licorice, earthy, tobacco, there's even some unexpected notes of coffee and sweet dried cherry.

Vineland 2005 Elevation Cabernet-Merlot ... A red blend of the big three reds, and again 13 years later it's still juicy with blackberry and black cherry, smoky, mocha, and good acidity ... As the wine sat open there were even hints of blue fruit that popped in and out.

Usually I pick a winner but this one is too close to call - maybe I'd go with the straight up Franc which was a mere $12.95 back in 2006 when I bought the wine and has no business being that good at that age for that price.