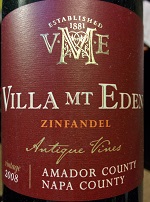 (June 14, 2015) ... I've said it before and I'll say it again, a good Zin is worth its weight in gold; what's even better is a good Zin with some age on it. This Mt. Eden came out at the LCBO in Ontario already with 5 years on it (I call that a 'lost in the warehouse selection') and it was released at under twenty bucks, so it was also a real bargain. The nose is full of spiced cherry and pepper, the palate shows much more complexity, still with the spiced cherry, but also joined by white pepper, cola, and vanilla bean. Good aromas, great flavours ... and it's all based on that spice and fruit, but the wine is starting to lean a little tertiary, so I'll be drinking the rest of my bottles sooner rather than later, I'd say within the year.