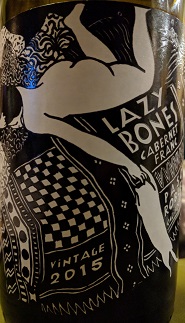 (December 19, 2017) ... Tonight I pulled out two from the US ... Starting with this Central Coast Wine Warehouse 2015 Lazy Bones Cabernet Franc, as a fan of single variety Cabernet Franc, mainly from Ontario, I always like to see other regions take on the grape. This California, Paso Robles, version has fairly aggressive tannins along with spiced plum, cassis, black raspberry, and leaves a fuzzy feeling on the tongue.

Next up, a Washington Cab, Wines of Substance 2015 Cabernet Sauvignon, this was a really lovely juicy number in its youth, not that it's so old now, but with some time in bottle it has settled down a bit delivering earthy, spiced-plum, graphite, sour cherry and smoke; it also seems a little drier than the previous juicy incarnation I tried.