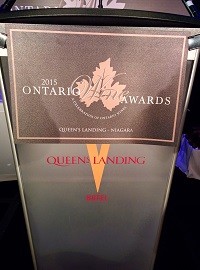 (May 8, 2015) ... The Ontario Wine Awards turned 21 this year … and as I sit to write this I am kicking back with a 10 year old bottle of Malivoire 2005 Pinot Noir, drinking the past but looking at the current batch of awards which show that Ontario has a very bright future indeed.

MC tonight was Chef John Higgins, with his Scottish brogue he entertained the crowd with a few stories, hammered home the idea that wine and food were an excellent match and that the industries should work together to forge a brighter future; he also reminded everyone to soak up sauce with a big chunk of bread (provided by Stonemill Bakery) “there’s nothing better,” he said. All in all John did a much better job than the previous year’s MC Andy Brandt and even John’s miscues were followed by a laugh and a knowing wink – it all sounds better in Scottish anyway.

Big winners this evening were Thirty Bench, picking up 3 golds, 3 silvers and winemaker of the year for Emma Garner. Konzelmann took home five (2 gold, 1 silver, 2 bronze), same amount as Kacaba (1 / 3 / 1), while Flat Rock and Pillitteri took 4 each – though Pillitteri did walk away with the big red award of the night.

Prince Edward County represented in more than just the Chardonnay category this year, picking up 7 medals, including two in the Pinot Noir race and two golds for Huff Estates (Pinot Noir and Sparkling).

This year golds were handed out in each category, though there were some that did not have silver or bronze winners and there were multiple ties, especially in the sweet wine categories.

The Big News … For those wondering if Exultet could win gold for a fifth year in a row for their Chardonnay over $20 - they did not, this year it was picked up by newcomer 16 Mile Cellar for their 2011 Civility Chardonnay.

Winemaker of the Year went to Emma Garner of Thirty Bench Wine Makers, whose acceptance speech was short and sweet – she legitimately seemed shocked and stunned to receive it … her resume of wins tonight (6 in total) showed why she deserved it.

And the Gold Medal winning wines are …
The rest of the winners, in the silver and bronze categories, can be found at www.ontariowineawards.ca.