My Gagliardo Visit in Piedmont (Italy)

(September 2021) ... There's a special place in my heart for Gianni Gagliardo - the winery, not the man. As it turns out, back in 2008, it was the very first winery I visited on my very first trip to Italy. I've been back to Italy many times, but never to this winery, until now.

The door is opened by a familiar face, Stefano Gagliardo, who guided our group 13 years ago ... Along with his two brothers: Alberto (the grower), Paolo (hospitality) -Stefano is the winemaker; today they run the winery. 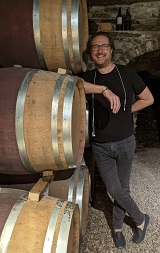 The winery was started back in 1961 when Stefano's grandfather Paolo decided to give up on his Dolcetto vineyard and put all his grapes in the basket of Nebbiolo - back then that was really a big deal; Dolcetto was the king grape of the region - but Poalo had a gut feeling, or as he put it “followed his heart” into the world of Barolo. He gave up his mixed farming practice for one hectare and a horse - creating Paolo Colla Winery. He was joined by his son Gianni in 1974, who then decided to expand the wineries holdings into the Roero region.

Today, the winery produces 180,000 bottles under 14 labels (including 8 Barolos - 6 cru / one village / one classical) - and as for the name change, in 1986 Gianni changed the name to better reflect who was in charge and to create a lasting legacy for himself and his family. The name is also pretty funny as Gagliardo is also a slang for “cool”, so yes, the name of the winery, in English, can be translated to “Johnny Cool” – it also can be translated to Johnny Vigorous, Johnny Valorous, Johnny Strength or Johnny Robust … but Johnny cool sounds so much better!

And now, the new generation of three brothers have once again expanded the Gagliardo winery holdings by investing in vineyards in the new appellation of Nizza DOCG (Italy's

newest DOCG appellation). Nizza is considered the best place to grow the region's most planted red grape (Barbera) - for those interested Moscato is the MOST planted grape. I end up learning more about Nizza at a Bersano visit and tasting the next day - but I taste my first Nizza wine here at Gagliardo, who now has 26 hectares in the Langhe and 10 hectares for their newest Nizza property: Tenuta Garetto, which is planted with 50 to 90 year old Barbera vines - and they make a spectacular wine with them (as I will soon find out). 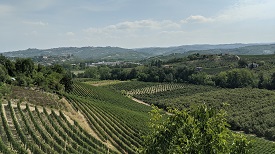 As luck would have it, Stefano made a lunch reservation at a nearby restaurant – we were running late and had to cut the tasting short to make our lunch appointment – but we returned to the winery to taste a few more bottles afterward (without Stefano).

This 20,000 bottle offering comes from the Roero area - a vineyard composed of 70% sand - in a valley that is open and clear; it's considered a warmer sight that ripens early. The wine is made all in stainless steel: smells fresh with notes of blood orange, dried strawberries and saline ... The palate does come across fresh and lively with an easy drinkability giving off notes of strawberry and sour cherry across the palate.  (*** ½)

2017 Nebbiolo D’Alba Superiore - San Porizio
The vineyard is 2 km away from the single vineyard that makes "da Batie" also located in the Roero. More clay and calcareous soil types, which make it possible to extend harvest times which in turn delivers more complexity in to the fruit. It spends 18 months in a single 35 hectoliter cask and produces only 4,000 bottles per year. Aromas of strawberry, floral, herbal and balsamic lead to a sweetish palate loaded with cherry and strawberry fruit, earthy and oaky with spicy notes backing; plus, a nice long linger finish of clove and spice.  (****)

2017 Barolo
A 30,000 bottle production where all crus contribute to the blend; it's a majority of La Morra, admits Stefano, and it is a wine released “ready to drink, but will age as well.” Lovely red and black fruit notes with strawberry, cherry, floral and menthol aromas ... Palate is all about freshness; but also with dark and red fruit, subtle pepper and other spices - shows more elegance than power and it's incredibly drinkable the moment the cork is popped. The finish has a lovely linger with balsamic and herbs.  (****+)

2016 Barolo - La Morra
This is their “village” Barolo that encompasses two parcels in the final blend. This very aromatic offering shows notes of cherry, blackberry and floral ... On the palate it's soft and gentle with a medium length finish. Key notes here are cherry blossoms, blackberry, spiced plum, and gentle tannins - such a pretty and elegant wine that, like so many of these wines, is so very drinkable right now.  (****+)

A cold, east facing site that seems to dry out first from rains and morning dew as well as the first place to see heat during the day ... It also has the advantage of having some of the oldest soils. Plenty of competing herbal notes: mint, clove, and anise which the fruit seems to hide behind. The palate is gentle and fresh, but also shows that herbal character and subtle spices on the medium length finish.  (*** ½+)

2017 Barolo - Mosconi
A mere 1100 bottles output from this southern exposed, warmer area ... This is a fruit forward number and while the nose leans on the dark side of the fruit spectrum along with mint and balsamic aromas; the palate shows off that dark fruit with a lovely freshness to it, and while there is a pleasant herbal character, it is suppressed by that dark fruit explosion.  (****+)

2017 Barolo - Lazzarito, Vigne Preve
This little spot is said to have its own “energy”, which finds its way into the wine. It's a sunny, sandstone plateau with 60 cm soils ... Another one of these small bottlings (2300 annually). At first sniff and sip you can get on earthy aggressiveness that this wine tends to show: darker fruit, more in your face tannins, along with darker undertones that leans smoky, peppery and herbal-esque all follows the Darth Vader edict "come to the dark side" - and even has that James Earl Jones huskiness about it - especially on the palate. Not for the faint-of-heart and yet there is also an elegance amongst all this power, which is, after all, a nice balancing act.  (****)

2016 Barolo - Monvigliero
Fresh and fruit driven with cherry, strawberry, hints of mocha and even a subtle earthy character.  (*** ½+)

2018 Madama - Barbera D’Alba Superiore
Aged 6 months in big casks of oak ... Rich fruit flavour, but balanced by an acid punch: plenty of sour cherry and cranberry on the finish.  (*** ½+)

Lovely freshness with its floral overtones and dark fruit undertones. Very drinkable with that dark fruit under belly, lush – “they” say the ultimate expression of Barbera comes from Nizza and you can feel it here: the finish rolls out cherry and blackberry kept fresh with good acid backbone.  (****+)

2018 Barbera D'Asti Superiore
Intense fruit: both dark and red with good acidity and a touch of grit ... Drank like a Pinot Noir with something to prove - call it oomph.  (****)

2020 Giassa
Made from 100% Grignolino, a red grape from Monferrato ... It sees short skin contact, has lots of acidity plus tons of cranberry and sour cherry fruit. Looks like a dark rosé, drinks like a very light bodied red.  (*** ½)