Taste it Again: Another Case+ with Larry

Lailey 2008 Chardonnay, Brickyard ... a little bit thin and bitter at first, but it opens up nicely over a few hours and shows apple with a creamy mid-palate to the finish. We're still good with this one. 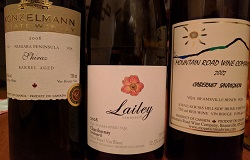 Peninsula Ridge 2007 Reserve Viognier ... what a horror show this was, we thought the Lailey Chardonnay was bad at first try, but we were proven wrong, this Viognier is terrible, oxidized and full on copper in colour, bitter from beginning to end; truly a revolting wine, someone said it was "nasty" and rotten; and they were right - this ship never righted itself.

Chateau des Charmes 2006 Riesling Estate ... dried apple and pear with petrol creeping in the back door, it has cool vintage character with dried apricot on the finish - I'd happily keep drinking this one, but the tasting must go on.

Konzelmann 2006 Red Moose (Zweigelt) ... pruny, cedary, weak with a short finish where the acidity drops right out; we were expecting nothing and got nothing in return.

Thomas & Vaughan 2002 Foch .... plastic cork closure, but you really can't improve or detract Foch, it's ruined the moment you put it in bottle: no nose, foul taste that continues front to back and ruins your palate, we had to go back to the Viognier just to get our tastebuds back - just kidding, we took a sip of the Riesling.

Lakeview Cellars 2002 Merlot ... another plastic cork, what a shame, it was oxidized, flat and unappealing, better than the Foch and the Red Moose but really that is feint praise indeed.

Mountain Road 2002 Cabernet Sauvignon ... This wine was worth a re-visit because upon opening it showed very little, as if it were closed off and needed the time: smoky, licorice and a touch cedary on the nose, but the palate was thin with watery-cassis and dry on the tongue, gave it even more time and found it had a Port-like quality (thick and viscous) with woodsy notes taking over. This was a push, but if we had to put on one side of the table or another it would go to the bad wines.

Picard / MacLaurin 2006 Pinot Noir ... DOA with no redeeming qualities , this one had a good life cause I tried it a few years back and it was just hanging on; if you have any of this wine in your cellar now it would make a great base for salad dressing but that's about it.

Konzelmann 2006 Shiraz, Barrel Aged ... Speaking of barely hanging on this Shiraz has that characteristic; slightly peppery note with dried raspberry and dried red licorice pieces - it's drinkable, but do it quickly.

Trius 2002 Cabernet Franc ... cedary and woodsy on the front and back end but the mid shows cassis, green pepper and dried raspberry; not bad for a 14 year old Franc.

Trius 2005 Cabernet Franc ... what a disappointment this one was after tasting the 2002, which at least had some character to it, this one lacked in all departments, even after we let it sit and air out a bit; it had some mocha and smoke but it didn't go anywhere from there.

Hillebrand 2007 Clark Farm Cabernet Sauvignon ... This is the wine I ended the night with because I thought it was right where I thought it should be: vanilla, cedar and smokey nose; blackberry, spice, cocoa-mocha on the palate and it got better as the night wore on.

Konzelmann 2006 Peachwine ... Larry wanted no part of this but somehow I talked him into trying it and we were both blown away by how delicious this wine was; refreshingly peachy and peach syrup-like, would have been great with some sparkling water as a palate cleanser - this one was surprisingly alive and well.