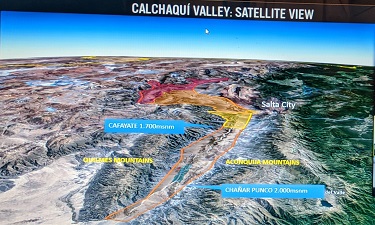 (August 27, 2020) ... High up in a secondary Valley of the Andes mountains, at about 1600 metres above sea level, is where you’ll find the vineyards of El Esteco in the Calchaqui Valleys region of Argentina … one of the highest valleys in the world. The valley is located in the north, close to the equator; yes it’s hot, but the altitude more than makes up for it. The Calchaqui only makes up about 2% of Argentine vineyards (3800 hectares) where dry winds, low humidity and even lower rainfall (200 mm / year) exist. With poor, yet mineral rich soils, grow the grapes that go into the bottles of El Esteco wines. While many assume Malbec to be the main grape, for El Esteco it’s all about Cabernet Sauvignon as the grape is king in their vineyards and of the Valley, making up 26% of total plantings.

Interesting historical note: Cabernet Sauvignon appeared for the first time in Mendoza in 1853 and Argentina ranks seventh in the world for area devoted to the grape; China is number one with 60,000 hectares followed by France, Chile, the United States and Australia just to round out the top five.

2018 Don David Reserve Cabernet Sauvignon
70% of this wine spends 12 months in both French and American oak, while 30% sees stainless steel to retain freshness. 100% of the wine is Cabernet Sauvignon: 89% grown in sandy soil, 9% in Limestone and 2% in clay. The palate is dominated by red and dark fruit with lots of spice and acidity to keep things fresh. There’s a nice peppercorn note on the mid-palate with some chalky-minerality and a finish that shows off cassis and spiced-plum.  Rating: *** ½

2016 Cabernet Sauvignon ($22.95 - #568907)
This 100% Cabernet Sauvignon spends 12 months in used French oak, with 20% receiving “other aging means” to retain freshness. Juicy red fruit like red currants and spiced-cherry with notes of cinnamon, pepper and a rich minerality. The acidity is on-point with tannins that provide power, but there’s also a purity of fruit, especially mid-palate to the finish, with notes of cassis and bittersweet cocoa lingering there.  Rating: ****

2015 Altimus Gran Vino ($50.00 - #11974)
An exciting wine that’s rich in flavour and intensity. A blend of 55% Cabernet Sauvignon, 30% Malbec, 10% Cabernet Franc and 5% Merlot spending 18 months in 6000L French oak barrels. It starts off with minty, blueberry, spice and intense dark fruits that grab the tongue and hold on along with tobacco and fine tannins … With a little time in glass there’s a smoothness and silkiness that makes this wine easy to drink – and although it comes in at a pretty high 14.5% alcohol there is still a fresh feel to the wine thanks to that acid backbone. Beautiful texture with hints of dark chocolate on the finish.  Rating: **** ½

2018 Old Vines Cabernet Sauvignon 1947 ($24.95 - #15082)
This was a much lighter and leaner Cabernet than I would have thought from an old vines wine. The most recognizable note from sniff to taste was an herbal or grassy note along with some tobacco leaf (something more associated with Cabernet Franc). There were also hints of cassis, mocha and blackberry which appear after being open awhile, but always with that smoky-herbal-tobacco tone.  Rating: ***+