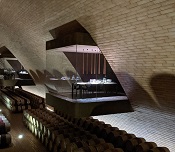 (September 2021) ... One of the most impressive winery buildings and it consistently makes the list of the best / must visit wineries in Italy.

The Antinori family entered the wine business back in 1385 and since then at least one member of the family has been involved every generation (a total of 26 generations). This building was excavated (and started) in 2005 and finished in 2012 - it was the first Antinori property ever conceived to host guests (all other properties were never designed that way). In the building planning, making and conceiving, lots of browns, terracotta and steel were the main elements used so it would blend into its surrounding - to that end the building is actually covered with a “living roof” that grows grape vines right on top of the winery. Antinori has just recently started experimenting with those vines to make a special cuvee of the wine produced from these grapes. 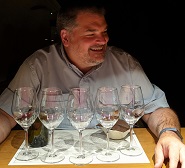 2020 Bramito (Umbria)
From the Castello della Sala property purchased in 1940 ... This 100% Chardonnay is a 50/50 blend of stainless steel and barrel fermented; then it spends a further 5 months in barrel - well 50% of it does - the rest remains in steel to preserve the freshness. The good news is that that freshness translates on to the nose and the palate: pear, apple, melon with some spicy and even some butteriness. The palate does show a little richness, which does end up dominating the freshness factor here: The nose ranks a 6 out of 10 in that department, while the palate takes it down to a 5 out of 10.  (*** ½)

2018 Villa Antinori - Chianti Classico
Fruit comes primarily from the Tenuta di Sansano near Siena ... As per regulations it's primarily Sangiovese with 10% international varieties (mainly Cabernet Sauvignon). The international grapes age in barrique, while the Sangiovese spends one year in big casks. Smoky black fruit dominates this year with notes of balsamic, floral and spice - tannins prove to be mainly silky with a touch of grit.  (*** ½+)

2018 Botrosecco - Le Mortelle
The Southern Maremma is ideal for international varieties, which is exactly where this vineyard is located and what this wine is made from. It's a big dose of Cabernet Sauvignon with Cabernet Franc playing backup. The wine is age 12 months in barrique barrels, no new oak, and the first vintage of this wine appeared in 2007. Silky red fruit with plum and cherry dominating there’s also hints of smoke and spice on the finish. Good structure and nice tannins round this wine off.  (****)

2018 Poggio all Nane - Le Mortelle
The "Le Mortelle" property was purchased in 1999, consisting of 170 acres and is home to three whites (Viognier / Vermentino / Ansomica) and three reds (Cabernet Sauvignon / Cabernet Franc / Carmenere) - you read that last one correctly, the grape that Chile is attempting to make famous also resides in an Antinori vineyard in Maremma, Italy. This Cabernet Franc dominated blend has Cabernet Sauvignon and Carmenere in the mix, which was added for the first time in the 2016 vintage, after 5-to-6 years of research to see if the variety was viable in this location - obviously it was, and is. The first vintage of Poggio Alle Nane was in 2009 - but was certainly made better with the addition of Carmenere in 2016. It is age 16 months in barrique, of which ⅓ is new. This was my favorite wine of the tasting with a complexity that blew me away: mocha and black fruit on the nose with a palate that delivers dark fruit, pepper, tobacco and the promise of so much more to come. It's a wild wine from its make up to its aromas right down to the flavours. I walked out thinking "Carmenere in Italy, who 'da thunk it?" - well Antinori obviously.  (**** ½) 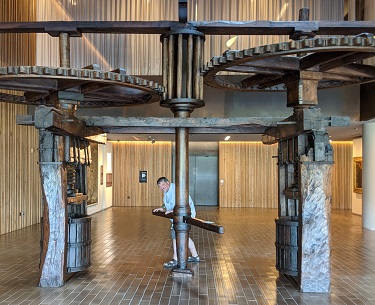