I get asked all the time why I rate with stars and not points, some even tell me they can’t use my scores because they are “not understood by the public the way points are”, and while it is tempting to pander to the public’s lust for the 100 point system of "scoring" wine, I cannot fundamentally get behind a system that is fatally broken and getting worse instead of better.

I also can't get behind something that benefits charlatans trying to make a name for themselves, those insisting on seeing their name in print at the cost of their integrity, or those trying to sell their opinion to the highest bidder, by giving over inflated scores.

Let’s face it, the wine world is scoring out of 10 and the starting point these days is 90 … I’ve been thinking about this a lot lately and it’s a window to the wine world that’s hard to look into; but to be brutally honest, the 100 point system is very broken, it's hard to believe any number that comes out of it ... hell when I was in Australia and asked some of the winemakers about the scores they were getting from the likes of Halliday or Suckling they laughed - one even said they make fun of those guys. And those type of inflated scores are coming over here - how can I take the Toronto Star seriously when their reviewer is giving 94s & 95s out like flyers on a street corner? And I'm not just picking on the Toronto Star, the examples are too numerous to mention - it's just easier to stick close to home; but look for yourself, scores in the 90s are rampant in the media.

It’s time to come to terms with the new reality: the new normal is 90. The scale starts at 90 and the truth is reviewers trying to make a splash are just rating out of 10 ... it's a slippery slope they find themselves on.  When I started over 15 years ago, 88-89 was a good solid wine, now that gets no press at all. I just wish the reviewers who are pandering to their publishers (and the wineries) were honest about it, and stop calling it “a one hundred point scale” – call it a 10 point scale starting at 90 … heck when Parker started the 100 point system even he was a regular in the 80-89 range and in truth was using a 20 point scale that started at 80 with 90 and above being the coveted carrot.

While it may be tempting to raise scores (as I know many are and have been doing) and jump into the 90's rat-race of over-inflating scores, I find my integrity gets in the way.  Some people can live with themselves - I would not be one of those who could knowingly give 90+ scores without at least giving a caveat to my readers that my scale started at 90. I remind you once again that 88 or 89 used to be a really good score, and 86 or 87 was still something to hang your hat on. Now a days it’s 90 or bust, and many reviewers are happy to oblige; and if you’re young and green, in the wine reviewing business, the best way to get noticed is to give those high scores – which then forces the hand of veterans who need to compete, and so the rush to the top of the scoring ladder continues, to stay relevant you must keep up with the times.

The list of writers and publications willing to go along with this charade is long and getting longer every day; for example, look no further than your local papers in Toronto – those reviewers are giving out 90s like candy on Halloween – every winery gets a piece … and why not, it’s the best way to keep the tap of wine flowing to your front door, everybody wants to do business with you, knowing that the least they can get from you is a 90.  And the global market for scores is no diiferent, there's the aforementioned Suckling and Halliday and then just this past week, at a pre-Vintages release tasting, I noticed one of the Italian wines had a 98 point score sticker attached to it (from Luca Maroni) … sure it was a nice wine, but a 98! Only if you’ve decided to score out of ten, and still it was a few point higher than it should have been. Look, the reality is 90 is the new 86, and thus maybe 98 is the new 93 on this newly concocted sliding scale - scoring has shifted and the public has to be made aware of that.

I started my deep thoughts on this issue when a winery recently reached out to say my stars need to be turned into points … 90 sells wine I am told, 88 is no longer good enough and stars do nothing for the consumer’s perception.

I’m currently judging at the All Canadian Wine Championships and after 2 days of tasting wines I have given out a smattering of 90s or above on my scoring sheet – and I taste a little over 100 wines per day - 90+ is a score reserved for the very best wines I try, it is not my default score ... I feel that while the world has gotten easier I have gotten tougher – and I can live with that.

My usual "scoring" scale is star-based: Average (3), Good (3.5), Very Good (4), Excellent (4.5) and Outstanding (5) - I add a little plus symbol in if I think the wine has got something special but does not deserve the step up ... though maybe I should start the post-100 point scale and start my ratings at one hundred, tell people I want to encourage the wineries to give a 110% effort … I may be a little tongue and cheek here, but I know that it is just the next step in this evolution.

So be wary of the new world order of wine scoring, inflation affects us all – but it should not affect a wine’s score – sadly inflation has found its way there too.

Henry of Pelham 2016 Baco Noir, Old Vines - $19.95 (W)
www.henryofpelham.com
Of all the Baco Noir Henry of Pelham makes, this would be my favourite; which is not saying much, I’m not a huge fan of the grape, like I know some are, but these guys know how to do Baco well. There’s an easy going sweetness to this wine, call it juicy, with both red and black fruit that makes it hard to pick out as Baco. There’s also a gentle spice to the fruit along with mocha and black cherry on the finish.  (****)

Kacaba 2015 Meritage Reserve - $44.95 (W)
www.kacaba.com
Lately the buzz about Kacaba has been about their Syrah, but they’re making some other fine reds as well, take this Meritage for instance, if the spicy blackberry and spiced-plum doesn’t get your mouth watering then surely the Christmas spices will; or maybe it’ll be the slightly herbal and peppery undertones or even possibly the spiced-raspberry finish … whatever it is there are spice notes running through this wine from beginning to end and if that’s “your jam”, this is your wine.  (****)

Pondview 2014 Cabernet Sauvignon, Bella Terra - $39.95 (W)
www.pondviewwinery.com
The popular thinking is that in Ontario we can ripen Cabernet Sauvignon three of every 10 years, and I would not have put 2014 on that list; but long time grower Lou Puglisi must know someone on high because he was able to make something special from his Sauvignon. Surprisingly rich for a 2014 after 22 months in French oak (30% new) and bottled unfiltered (so it will throw sediment with aging). The acidity is where you’d expect in this “off” year, but it’s the black cherry, mocha, smoke, vanilla, black pepper and earthy notes, without a hint of greenness, that’s really the big surprise. Well-balanced and layered from start to finish.  (****)

Tawse 2016 Gamay Noir - $19.95 (W, L)
www.tawsewinery.ca
Much better than Tawse’s 2015 effort, which I had high hopes for, lots of plum and cherry with subtle white pepper nuances on the finish, it also shows some great length – welcome back to the good Gamay fold Tawse.  (****)

Thirty Bench 2015 Cabernet Franc, Small Lot - $47.95 (W)
www.thirtybench.com
This 200-case Franc (hence the small lot moniker) spends 20 months in a mix of American and French oak … the American adds the sweetness and richness, the French brings the elegance and finesse. Tobacco, black raspberry, smoked-cherry and vanilla dominate currently, it’s tight right now as the fruit and oak play their dance in bottle, but give it another 2 years and this should be a real beauty and remain so for at least a decade of more.  (****+)

Wayne Gretzky 2015 Cabernet-Merlot, Estate Series - $29.95 (W)
www.gretzkyestateswines.com
Cabernet Franc dominates this wine blend, which starts out aggressively with wood and spice dominating, pretty much everything; but given time the fruit begins to show through, namely black fruit, a la cassis and blackberry with pepper, smoke and tobacco going along for the ride … there’s some American oak sweetness about this wine and there’s also a long dry finish – but with time it’s the fruit that should shine through, say 2-3 years.  (****+) 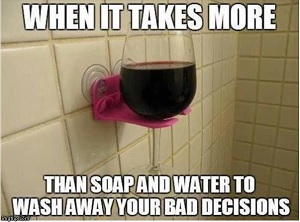 Socially Speaking …
Follow Michael Pinkus, the Grape Guy’s (almost) daily Tweets at http://twitter.com/TheGrapeGuy .
You can become a friend on Facebook: http://www.facebook.com/?ref=home#!/mepinkus .
Those who are “Linked In” can find Michael at http://ca.linkedin.com/pub/michael-pinkus/14/704/4b8 .

© MichaelPinkusWineReview.com 2018. All rights reserved. You may use the content of this newsletter by including full credit to Michael Pinkus, Grape Guy and a link to www.michaelpinkuswinereview.com