(January 13, 2018) … The day started out on the InterIslander ferry to the South Island, It was a rainy, overcast day and all we could see was mostly water all around us, but as we got closer to Picton and into the Cook Straights things started looking a little different … too bad about the weather, but it was still pretty spectacular.

Once onto the South Island we made our way south to Blenheim with our first stop at Nautilus and our last being Marisco – in-between we had two days of informative meetings and tasting with some of the great men and women putting it all out there in the bottle.

We stayed at their cottage in the Kaituna vineyard, which was quite simply a great break from the average hotel and motel we had been staying in; I cannot thank them enough for their hospitality – doesn’t mean I will score their wines any differently, but it does mean I have oodles of respect for them. Nautilus has the “best sparkling in New Zealand” (self-described) and if they keep saying it sooner or later everybody else will – heck I said it … but also I tend to agree (or at least it’s up in the top three I tasted), both the NV Brut and Vintage Rosé were awesome and were a great introduction to this 77 hectare estate with 6 of their own vineyards (and 6 contracted growers). It was here I learned that Marlborough is almost all planted out (and no one disputed that fact). 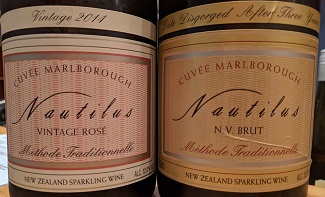 “Pa” means home so the actual meaning of this winery’s name is “The Home” it was founded by the (Haysley) MacDonald family and this has been their home for 800+ years; they grow Sauvignon Blanc, Chardonnay, Pinot Gris and Pinot Noir, they planted their first vines in 2003 and started their own brand in 2011. The Chardonnay is a relatively new addition to Te Pa – the first release will be a 2015, though it has yet to be released to the public. They also have a vineyard on Wairau Bar – which is an awesome place to catch whitebait (or so I am told). 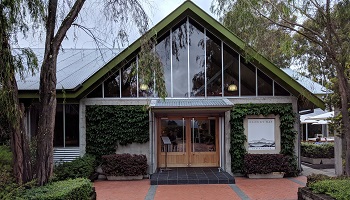 If I had to compare the sparkling wines I tried at Cloudy Bay (3) versus the one’s at Nautilus, I would have to give it to Nautilus by “that” much – but here was another place putting quality bubbles in a bottle and wowing the crowd with them (the Rosé was the best of the bunch). Starting in 1985 with a planting of Sauvignon Blanc Cloudy Bay (for better or worse) was the winery that pushed Sauvignon Blanc out at a high level and brought it to the world stage. They own 300 hectares with another 300 hectares of brought in fruit. They grow Chardonnay, Pinot Noir and Sauvignon Blanc. It was here I learned about the Benmorven Valley, Brancott Valley, Omaka Valley and Waihupai Valley (together known as the Southern Valleys) – there’s a fifth potentially coming on-line, Taylor. 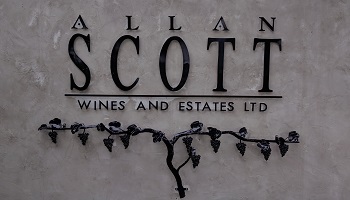 Allan Scott has an interesting story to tell, and we heard it right from the horse’s mouth as he joined us for lunch to discuss how he started as a sheep shearer and was part of the crew that help plant the original Montana vineyard (which became Brancott). Interesting to hear him describe the viticulturist part of his career as “fell into it”. Today he owns 100 hectares in the Marlborough and another 8 in the Central Otago (a project called “Scott Base”). He established his own brand in 1990 and it was fully operational in 1995. Being a viticulturist he grows a few more varieties than most in the region: Sauvignon Blanc, Pinot Noir, Chardonnay, Pinot Gris, Riesling, Gewurztraminer, Muscatel, and Sauvignon Gris. Although neither he nor his wife want to take responsibility for the idea of having a restaurant they have maintained and managed the first continuously run, same owner winery restaurant in New Zealand.

Villa Maria was a different kind of tasting, it was just a tasting – most wineries took us around and showed us their property and their vineyards, Villa Maria sat us down at a table with the winemaker and we tasted through 15 or so wines. 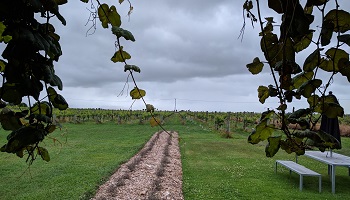 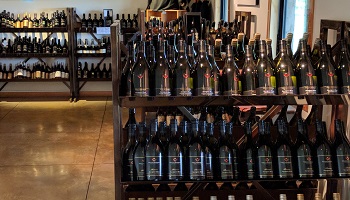 Renaissance Brewing Company …
Established in 2005. Many people I asked about this brewery raved about their product, we had dinner with Brian and Terri and had a lovely relaxing evening tasting through an array of beer – nice change from wine. They have the honour of being Small Champion Brewery in both Australia and New Zealand in 2013 (simultaneously and concurrently), they are the first in history to hold both those honours that way … interesting to note they won Australia again the following year. 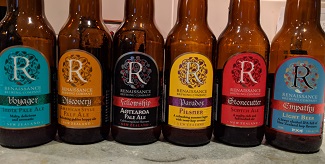 Duel family owned winery planted in 1979, the first private planting in Marlborough, a crop of Semillon and Sauvignon Blanc. Their first vintage was in 2002. Since then they have added Chardonnay, Pinot Noir and Riesling into the mix, though they sell off their Riesling. They have 80 hectares on 8 different sites all within 3 km of the winery with an average vine age of about 18 years … they keep 30% of their fruit for their own purposes and sell off the remainder. Their goal is not the same old Sauvignon Blanc, they are looking to make Savvy that will age – it’s not for everybody, but if you get it you’ll see what they mean. The name Dog Point refers to the wild dogs that used to roam the area and attack farms and villagers, their logo is a “Ti Kouka” or Cabbage Tree. 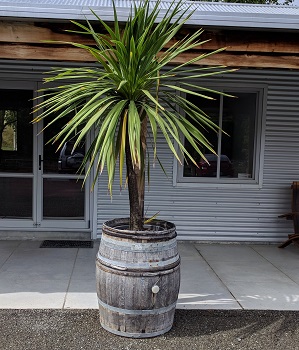 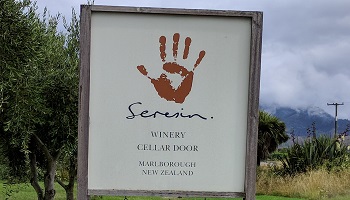 Established in 1996 by Michael Seresin, this winery boasts 2 labels (Momo and their Estate) and a bio-dynamic farm that grows everything from fruits and veggies to grazing sheep, cows, chicken and bees. They also sell and make their own olive oil, honey, jams and preserves. The infused olive oils in both lemon and lime are like none I have ever tasted before – it is because of the process they use in making the oils that makes them so special … and they are; the wines are pretty darn good too. 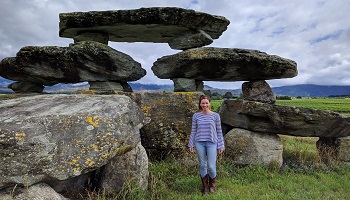 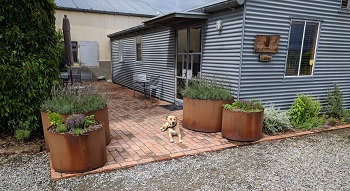 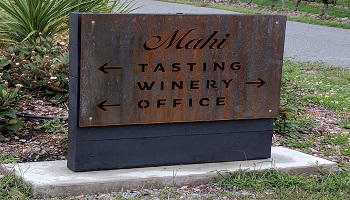 Interesting we went to Mahi, owned by Brian Bicknell, back at Seresin Krystal Palmer (pictured above), called Brian “a legend”; not surprised learn he worked there for 11 years. In 2006 he left to start his own label in an “abandoned” winery once inhabited by Cellier le Brun, which Brian purchased in 2006. Le Brun was a sparkling house and Brian is strictly forbidden to make bubbles, which he is okay with. His Mahi brand is exported to 14 countries. And for those looking for the etymology behind Mahi, it means “my work or craft”.  Up to this point it’s the best Rosé I have tried in New Zealand ... and being summertime pink is important. 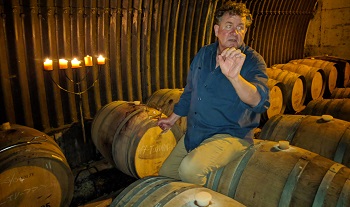 Tonight it’s dinner with an old friend – at least it feels like we’re old friends, Matt Mitchell of Marisco, whom Andre and I have interviewed on our Podcast series (Two Guys Talking Wine) … we tour the Marisco facilities which are impressive to say the least. Their home block is 260 hectares with 250 planted. It is owned by the former owners of Wither Hills, which was sold to Lion Brewing. The vineyard was planted between 2004-2006 to Sauvignon Blanc and Pinot Gris with Chardonnay coming along in 2013 – they also have ¾ of a hectare of Viognier. The big news here is the Leefield Project which just might have been the last of the arable land left for grapes in Marlborough, 2200 hectares.