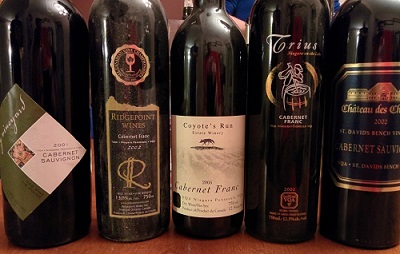 (November 14, 2016) ... It might be this night where the seeds of an idea were planted - Andre Proulx and I decided that we should collaborate on a podcast ... it would take another few months to come

about but we're now on our 13th episode and we're rolling along having a great time doing it ... but every idea starts somewhere and I believe this was that day (check out the podcast here).

We both have a love for Gamay and Cabernet Franc and so we started the evening that way, with a Louis Latour 2013 Borgogne Gamay, an 85 / 15 Gamay to Pinot Noir blend, and it turned out pretty much as you'd expect: earthy with sour cherry, hints of strawberry along with red and black cherry ... pleasant and worth about 30 minutes in the fridge to liven up that fruit. 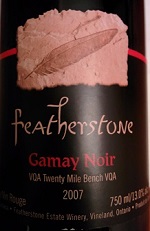 Featherstone 2007 Gamay Noir ... from a hot Ontario (Canada) summer comes this wine from one of our better Gamay producers - sadly the vines have been pulled out, but with luck they will be back again (time will tell). Strawberries dusted with cocoa, dried cherry and cassis ... Very un-Gamay like but at nine years of age still very interesting, there was also a cooked fruit note that roared through this wine; but overall it has stood the test of time.

After our double-down on Gamay it was time to hit a trifecta of Franc, starting with a Hillebrand/Trius 2002 Cabernet Franc: earthy, herbaceous, and leathery; someone in the room described it as "a little poop-ish" (a la Pinot Noir) but there was also a savoury, Italian seasoning element to it as well.

Franc #2 was the Ridgepoint 2002 Cabernet Franc, and it was a horrific mess: rubber hose, medicinal, chemical, and even a little funky; the nicest thing we could say about this was 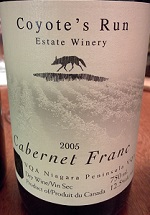 the acidity was good (of course we tasted it, we are professionals after all, and we regretted it).

Our final Franc was the Coyote's Run 2005 Cabernet Franc which did not disappoint - this one still shows quite a bit of fruit, though it also has some subtle green pepper (harking back to the olden days of unripe Ontario Franc) long finish with violets, raspberry, smoke, and good acidity; this one is holding up quite well but it's time will soon come to an end, so drink 'em if you got 'em.

It was then decided to delve into a couple of older vintages of Cabernet Sauvignon. We started with a Lailey 2001 Cabernet Sauvignon, there was some debate as to ladybug character (a problem in that vintage) with hints of peanut butter on the nose, but there was also a rubbery aspect that detracted from the enjoyment. Not one of Lailey's finest hours. 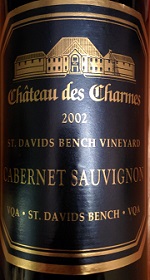 On the other hand, the Chateau des Charmes 2002 Cabernet Sauvignon, St David's Bench really wowed us for a 13 year old wine: great smoky notes kicked things off, pairing well with the dark and dried berries, plus cassis and cocoa ... proved to be a smooth wine yet with enough tannins and texture to carry it through. Another old gem from the Chateau of Ontario.

Here are links to the original reviews for some of the wines above: