(April 18, 2016) ... A friend of ours had some "house problems" that required her to move out for a month while they fixed it ... we thought we'd head over to her extra-large hotel room (two floors, wow) and cheer her up a bit with a wine tasting of some interesting older Ontario wines - some of which I had no previous note for - but you can find my original notes of the Flat Rock and 16 Mile wines by clicking the wine name ... now let's see what the consensus on these wines were.

Wagner 2008 Log House White ... This was a surprise. I thought for sure it would be dead as a door-nail and while the nose would best be described as non-descript there was a slightly 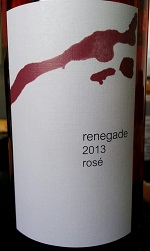 honeyed note with a touch of floral along with Vidal-flavours like peaches in syrup. It did have a short finish and was okay but not something we were really prepared to drink, just taste.

16 Mile 2013 Rose ... Sadly this wine was not at all what I expected, it was my second time opening this particular wine in two days and both ended up as oxidized and bad, hard to drink even - for such a great producer of Pinot Noir and Chardonnay this was a shock, but then again you can't always make great wine every time.

Chateau des Charmes 2007 Chardonnay, Estate ... I know I was a fan of this one when it came out but now at the 9 year junction it would not make that list again: slightly oxidized, especially on the nose, but it improves with some time in glass; you'll also find hints of vanilla, gentle spice, and a lengthy finish on the 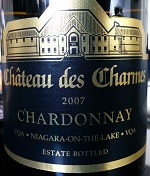 palate, but it always has that tinge of oxidization which gives it a sweetish note that's not always that welcome.

Flat Rock 2011 Rusty Shed Chardonnay ... Not that far past vintage date I had a good idea that this one might still be fresh and lively, it says something for screwcap's ageability as this wine barely showed its 5 years: nice buttery and spicy character with peach and apple fruit sprinkled with a dash of cinnamon.