An Overview ... Errazuriz is a wine company that dates back to 1870 in Chile and founded by Don Maximiano - a name that still appears prominently on their wines and labels in one form or another – plus, fun fact, the Errazuriz family has been the source of four Chilean presidents. In 1873 they release their first wine. In the 1890's the winery has 700 hectares under vine and is the world's largest privately held vineyard.

The winery has not always been in operation, because of the socialist government regulations from 1933 into the 70's the winery closed its doors and was not fully resurrected until 1983, when Edouardo Chadwick joined his father who then handed him the keys to the winery. it is then that the winery really took off with new ideas and a new vision under this new leadership. At that time the winery was re-opened it was a small 10 hectare farm, today it's a 500 hectare winery based in the Aconcagua Valley.

Today’s tasting is with Francisco Baettig, and as luck would have it, Edouardo joins in - during the times of Co-Vid it's amazing the kind of time one has on one's hands that one would not have during busier (read: more normal). The tasting consists of three wines (two from 2018 and a 2017) plus an overview of the “extraordinary” 2018 vintage.

Considering that Chile is one of the best places to grow grapes on the planet, it’s impressive to hear a winemaker to make the statement "2018 is one of the best vintages in a long time, all factors and variations aligned,” said Francisco. Usually, January is blisteringly hot and vines have a tendency to shut down (more than once) but in 2018 January proved to be “moderate” with no real heat spikes, while February, March and April were average.

Today's three wine tasting started with a MAX - the new look for the former Max Reserva - and it is a beauty; followed by a new wine to the lineup MAX VIII and the flagship Don Maximiano.

MAX 2018 Cabernet Sauvignon
Considered one of the “best vintages in a along time”, which is saying something for Chile, a country that has great vintages all the time – this truly might be the best Max I have tried (and not just because it is under a new name – changed from Max Reserve midway through the 2018 vintage).  Dominated by dark fruit with a little floral and some cocoa notes – nice complexity with a long finish.  Rating: ****+
LCBO 335174 ... 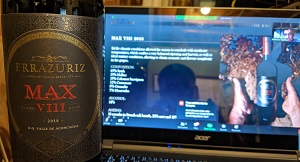 Takes its name from the vineyards the grapes come from - the grapes are sourced from all eight of the Errazuriz vineyards in the Aconcagua Valley. The blend is 43% Syrah followed by 15% each of Malbec and Cabernet Sauvignon, 12% Carmenere, 8% Grenache and 7% Mourvedre; aged 16 months in French oak (only 28% new). The wine itself comes across smooth with lots of red fruit - the acidity keeps it lively and fresh with some delicate floral notes on the nose; the palate is well rounded with white pepper contributing yet another verse in this cacophony of aromas of flavours. The tannins are present, but they seem to lie more on the silky side than on the gritty side ... It's a layered and lovely wine destined to get better over the next three to five years.  Rating: ****

Don Maximiano 2017
From the very hot 2017 vintage which was a concentrated and early vintage which Francesco called "extreme” ... The Maximiano used to be a Cabernet Sauvignon only wine, but has now transitioned into a Cabernet Sauvignon blend - this version contains 12% Malbec, 8% Carmenere, 7% Petit Verdot and 6% Cabernet Franc, aged 22 months in French oak (72% new). Over the two days I tried this wine it never seemed to come together - starting out leathery, smokey and herbal ... The tannins come across as firm with lots of dark fruit backing, but there is a real grip to the wine with a real leathery finish; plus burnt coffee bean and cedar. It comes across harsh and my fear is that it never does fully realize itself to reach its full potential due to that extreme vintage (and that whack of new oak). Time will tell, but I reserve judgment and score at this time ... Maybe if I taste a bottle again in 5 years or so I'll have a better handle on things. But right now, I think the combination of both the extreme vintage and the maximal use of oak has hurt this wine for the long run.
No score at this time